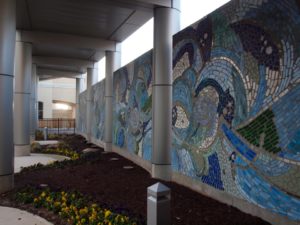 This mosaic mural, measuring 10 feet tall and 65 feet wide is at the entrance of the Atlanticare Regional Medical Center in Atlantic City, NJ.

Two blocks from the ocean, it survived hurricane Sandy.

The terrazzo was all hand cut, and consists of ceramic tile, stained glass, and mirror.  Two weeks of prep work cutting the glass, four weeks of install. This mural is now considered a landmark in Atlantic City. 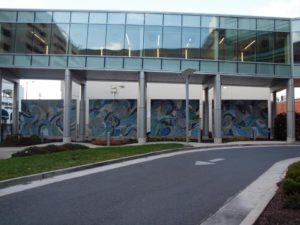 This mural was my first foray into large scale installations. I was dragged reluctantly, as I was happy in my air-conditioned studio painting and creating 3-dimensional found object sculptures.

But I caught the bug. Large-scale public art – seen by hundreds of people a day, maybe thousands. There is no coercing people into a gallery. It’s already been bought and paid for, so no sweating whether or not you make a sale…

I actively pursued other mosaic projects and taught workshops.  The later projects paled in size to this, but each was a challenge.