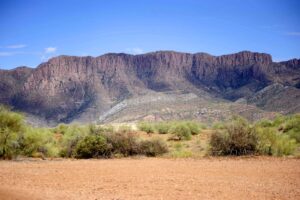 The cloud cover added to the cooling effect of the elevation, and it was pleasant all day as we walked the streets of Superior, and stopped into the Silver King Smokehouse and Saloon. Best pulled pork this side of the valley! END_OF_DOCUMENT_TOKEN_TO_BE_REPLACED 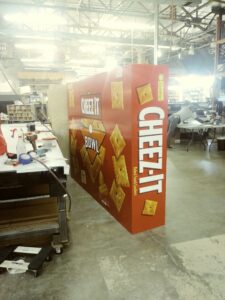 We were the winning bid to design and fabricate props for floats in the Fiesta Bowl parade.

One float, sponsored by, you guessed it, Cheez-It – wanted huge Cheez-It boxes.
Made of 3/4″ plywood, the boxes were then wrapped in printed vinyl. The boxes were to be the backs of two sets of bleachers on a float for the parade. END_OF_DOCUMENT_TOKEN_TO_BE_REPLACED 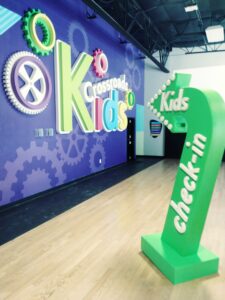 Another church children’s program – it seems the churches in Arizona have to compete to get families.

The 3-dimensional pieces on the wall are all Styrofoam, coated wit Rhino coat and painted.  They are all backed with 1/2″ plywood for stability.

The arrow is a wood base and Styrofoam coated with Rhino coat. The letters are pine cut to shape on a CNC router.  The base has casters on the front, so that the prop can be easily moved.

The wall is printed vinyl applied like wallpaper. All of this was designed and fabricated in a now defunct print shop in Mesa Arizona. 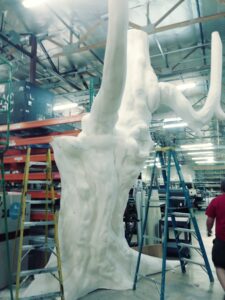 Sometimes it pays off to be paid to have fun. A church in Tempe, AZ wanted a showpiece for their children’s ministry.

They wanted a huge tree in the foyer of their school building. More than 20 feet high, We needed to construct offsite the prop that was then to be installed in the building.

The skeleton of the tree was constructed of steel and wood framework. We sculpted the tree out of 4’x8′ sheets of Styrofoam. END_OF_DOCUMENT_TOKEN_TO_BE_REPLACED 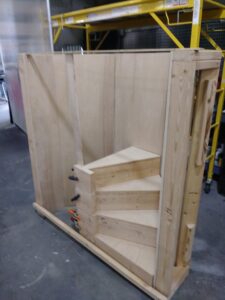 As an artist, I tend to love anything creative, and more so if it involves using my hands. Woodworking is a creative and therapeutic outlet for a restless mind.

My found object, re-purposed art is a fun outlet.  I have been employed in the large format print/ fabrication industry for the past eight years. Some of the moist exciting projects involved carpentry.

The photos here show a child’s playhouse with a spiral staircase.  I am certain the time spent on this project was way more than an experienced carpenter would have required. 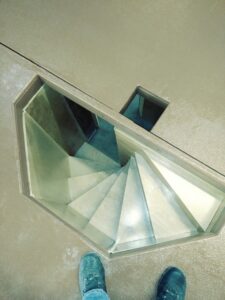 The project was designed with EnCad, a program much beyond my scope of experience or ability. The wood was cut on a MultiCam CNC router, all part of my abilities. 3/4″ marine grade plywood and Luan were used in the construction. 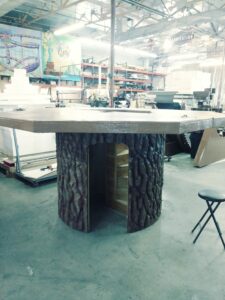 The end result was a fun play tree house.  I unfortunately never got to see the finished result, which included a rail around the perimeter and a treehouse on the top. It now resides in a church somewhere in Utah for their children’s ministry.

This was one of several pieces that they ordered to fit their theme.

Wood is one of the most versatile materials that can be used to create almost anything one can imagine.

The Superstition Mountain Museum is a must see if you are ever in Apache Junction, AZ. It has the only two surviving structures of the Apache Land Movie Studios, a working stamp mill, a scale railroad featuring the history of Arizona, mining artifacts and twelve acres of grounds with walking paths all in front of the wonderful backdrop of the Superstition Mountains. All of this is free to the public. The indoor museum is open for a nominal fee, and provides the  visitor with in depth history of the wild and weird Superstitions.

Before I parted with the postcards, I made high definition scans and reproduced a limited quantity.

I am offering sets of 17 cards (5 are not shown here) for $50 while supplies last. Just contact me at carl at cbjart dot com if you are interested. When they are gone, there are no more. END_OF_DOCUMENT_TOKEN_TO_BE_REPLACED