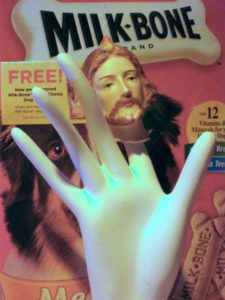 Things you don’t talk about at bars: politics and religion.

I talk about both!

The liberal left and progressives in particular act as if government is sacrosanct. Government can do no wrong, and hence, any cuts to any division of the bloated bureaucracy is off limits – unless of course those cuts are the gutting of the national defense.

I laugh aloud every time I hear the knee-jerk reaction of a progressive when the reduction of federal spending is discussed. God forbid we ever cut one dime to any government agency.

Two agencies in particular have earned my ire. The Federal Trade Commission and the Federal Communications Commission. The FTC is the agency in charge of enforcing the Do Not Call List, a government program that was widely heralded to end nuisance phone calls.

I receive at least a dozen unsolicited calls daily. My number has been on the Do Not Call list since before the list became official. At one time I diligently filed complaints on every single unsolicited call. Those calls were in direct violation of federal law. Every one of those calls should have resulted in a $2000 fine to the caller.

Not one call has been prosecuted. Not one complaint has ever been followed up on or even investigated. So forgive me if I applaud Donald Trump on tax cuts! Let me keep the money I have earned. And I could not care less if every employee of these worthless agencies ends up in the unemployment line. They can live in the gutters with their families for all I care. Currently they are getting paid a fine salary for doing nothing. I am sorry, but I have to work at my job. I have to show up to work and actually show results, perform the duties for which I collect my paycheck.

I gave up filing complaints, a total waste of time. And in my opinion, the DNC list is nothing more than a list of confirmed telephone numbers that spammers can use freely, without fear of any repercussion. They call me at 6AM, a violation of law even if I did give them permission to annoy me.

The last thing a stranger wants to do, if they are sitting next to me at the bar, is to admit that they are a telemarketer. I will simply punch them in the face.  I am totally in favor of a law that mandates the death penalty for spam callers.

I am fighting back. I got a call from a guy calling from the Breast Cancer Awareness Institute or some other scam non-profit where the money pays some CEO 6 figures and puts the rest of the money back into fundraising, and does absolutely nothing for cancer victims.

He responded that I was “not very polite” to which I retorted that he was not very polite calling me in the middle of the work day asking me for money! Since almost ALL charitable organizations are frauds that give very little cash to the causes they espouse, I did not at all feel bad about tying up his time and being rude.

Another caller from one of the criminal enterprises warning me that my computer was infected with a nasty virus was confused when I asked what color her panties were. She replied, in broken English, “I do not understand.” I said, “What color is your underwear?” “I am sorry, I don’t understand.” I replied, “Oh, so you are going commando? So sexy.” She hung up.

Yesterday, someone called me offering me a business loan. She said I was pre-qualified. I exclaimed that this was fortunate that she called, that I really could use the loan. She asked me how much I needed, and I said, “$250,000.” She perked up, and then asked me what I needed the money for. I responded, “Cocaine and whores.” She paused, and then said she didn’t understand, I said, “Coke and whores.” She hung up.

I had another caller on the line for a while when he told me my computer had a virus. I told him thank you for calling, when was he sending me my new computer, the goddamned hackers broke my computer.

Since I can’t stop the calls from flooding in, and since the federal government has completely refused to do their job to follow up on every complaint and to prosecute every lawbreaker, I am doing my best to tie them up. Every minute I keep them on the line prevents them from calling someone else, someone that might be stupid enough to provide personal information. And since I put my phone on speaker mode, it provides us with hilarity and breaks up an otherwise monotonous day.