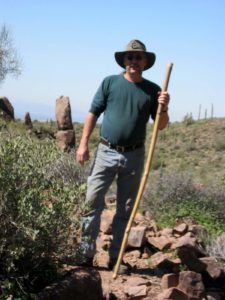 Carl B. Johnson is a New Jersey expatiate residing in the Sonora Desert of Arizona.

A professional artist, he is best known for his bar series of paintings of local drinking establishments. He also does three-dimensional found object sculpture, large scale mosaic installations and dabbles in photography.

Carl has published several books of non-fiction, including two books of his bar paintings. He published an underground arts newspaper for seven years, a retrospective which is now a book “Inferno – burning the bridges behind us” available on Amazon.com.

Carl works in the large scale printing industry, operating and maintaining printers that are as large as motor vehicles, and cost three times as much. These printers print on fabric rolls that are 10-foot wide, and on vinyl substrates that are almost 5-foot wide, as well as rigid materials such as 4’x8′ sheets of acrylic, aluminum, corrugated plastic and foam core.

For recreation, he hikes and kayaks in the Arizona wilderness. He is an avid marksman, target shooting in the desert. He brews beer at home, and dreams one day of distilling whiskey. He loves to ride his Harley, and off-roads in his Polaris RZR side by side.

This blog is his attempt at a diary of things he finds interesting. He hopes that you might find some posts informational and entertaining. If you don’t, he really doesn’t give a damn.