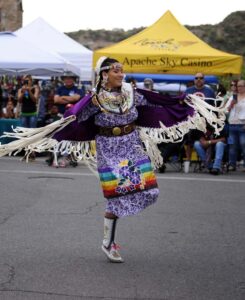 From June until September, we tend to hide indoors. We in the East Valley enjoy the lack of the winter visitors, which we call Snowbirds.

As our temperatures creep below 105°F our winter visitors creep in. But we also welcome the events that make this state the Great 48. 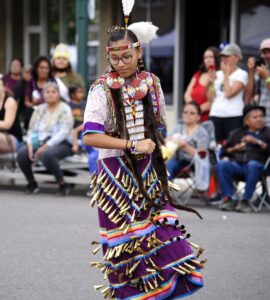 Today Liz and I ventured to Globe, AZ for the Apache Jii.  Jii is Apache for Day. The Apache Jii is an annual festival in Globe celebrating the Apache dances and ceremonies.

Ken and Doreen Duncan of the Yellow Bird Dancers have done so much for the Apache community, and they have three generation of dancers.

Doreen is native from, I think, North Dakota. Ken is Apache from San Carlos Reservation. Together they present authentic Native dances. Their children are all beautiful people. The Apache are a proud people, and watching them dance proves their agility and ability to achieve perfection ion their art. 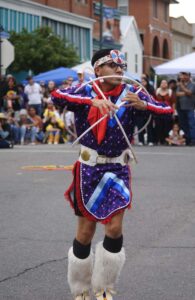 The Duncan’s children have repeatedly taken prizes for their expertise.  They have performed at the White House and the Smithsonian.  I am privileged to have met them and seen them in Arizona.

Globe is a mining town that has seen better times. There are now several bars, but little business. The Ford dealership had maybe five cars in the lot.

I spent more money than I planned, more than I had to spend.  Credit cards are evil. I met a great Navajo couple that make jewelry. I bought a great ring – silver and Sleeping Beauty Turquoise mined from Arizona. 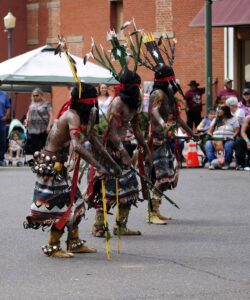 The next even was the Crown Dancers from White Mountain reservation. The Crown Dancers are very important in the Apache Nation. I only wish the narrator had talked more of their significance.

Most of the crowd in Globe for this event were native, so they needed no explanation. And this event is not really a tourist event, most of the people attending were native, most from San Carlos. A lesson to be learned, support your people. 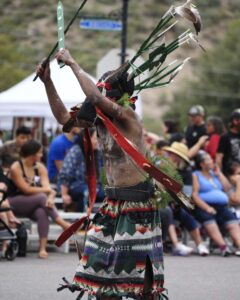 I have not included pictures of the clown, the dancer in all white, because, frankly he is scary.  The clown is the law enforcer, and foolish he is not.

I do not know that much of the celebrations, but I have seen the clown dancer rule with an iron fist. He is not a holy man as far as I know, maybe more of a judge and jury in one, this is coming from a White Eyes… and I know enough not to approach the shaman or priest.

The Apache Jii in Globe is different from the Pow Wows the natives do in Las Vegas or even in Mesa. This event is geared to the Indians… and yes, you can call them Indians. Don’t be so woke you make up names – my native friends hate being forced to refer to themselves as anything other than what they are because some woke white eyes decided they are so guilt ridden they have to make up new names. If you do not know their tribe – then do not pretend you care.  Apache want to be called Apache, not native or Indian or redskin. Pima want to be called Pima. Many of my friends call them self Indians.  Rather than pretense, meet your neighbor and call them friend.