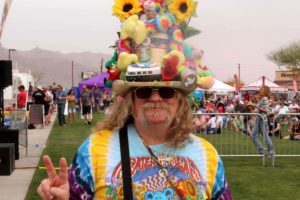 Last week I was recovering from the Blue and Brews festival in Apache Junction. This is the second year they have promoted this event. The first year it was behind a local bar… the facilities were not big enough to handle the crowd.

This year the event was held in the newly built Flat Iron Park. Talk to me about the benefits of consumption based (sales) taxes!

AJ is a snow bird destination, and more than half of our population in the winter are out of staters. They don’t use the school facilities. They do utilize our police and rescue services and other city services.  The services they do use are funded entirely by our sales tax.Apache Junction does not have a city property tax.  Yeah, we still have to deal with the school taxes and county taxes and fire district tax. The fire district tax ad school district tax are sort of a necessary evil, paid for by residents that live here and utilize the resources.

I will gladly pay a 10% sales tax on purchases to fund city services in lieu of regressive property taxes. Most of the birds live in trailers and RV’s. A property tax would unfairly burden the year long residents with a subsidization of the Birds.

Sales taxes are also voluntary – you don’t want to pay them, don’t buy! You don’t ow a house? No problem, you are still paying into coffers that provide the services you use.  Are you a  jobless tweaker that begs on the street corners? You still pay every time you get that 36 ounce Pepsi at the Quick Trip.

Flat Iron Park gets its name from Superstition Mountain. The highest peak looks over a plateau that is shaped like, well, a flat iron.  Your grandmother would know what that is.  The land used to be home to abandoned apartments.  The street is the closest thing we have to a downtown style Main Street. AJ doesn’t have a downtown to capitalize on, so we must be creative.

This was the first time the promoters of the Blues and Brews Festival worked an event this large. All in all, it was a success… though not without some painful lessons.

We purchased our tickets far in advance. Advance tickets were $10, tickets at the gate were $15. Hey, that savings equates to two beers for us!

I was disappointed that there was only one line to enter the park… no Will Call or ticket holder line. No big deal except that people that were paying at the gate slowed down the line and then got better seating positions in the park.

The bands that were booked were excellent. Sure, there was no John Mayall or B.B. King. However, I am a huge supporter of local music.

My two biggest complaints were the sound, and the variety (or lack thereof) of brews. And these issues have already been addressed by the promoters, who promise to do better next year. More on this in a bit.

The park was packed with vendors. Great food, and affordable! Local artisans and artists. The porta-potties, brought in to take the load off of the restroom facilities were clean.

The food vendors were top notch – you could get everything from brats to fry bread. I am always amused when I see White Eyes Fry Bread trucks … the owners are not Native American. Alice Roach learned how to make Indian fry bread growing up near the Navajo reservation. The name is actually a derogatory term for white people… it would be the same as black people opening a soul food franchise and calling it Nigger Baby Chitlins.

Back to my grievances. The stage had no stacks… a couple Marshall stacks would have projected the sound throughout the park.  Hell, even some Peaveys would have been nice!  The sound system was configured for a large auditorium.  You had to get pretty close to the stage to hear the music. The promoters swear they will have some stacks for the next event. We talked and they listened.

Arizona has over 100 craft beer breweries, and the distributor offered two selections from Barrio Brewery out of Tucson. After the first hour they sold out. After that, you could have any beer you wanted as long as it was Budweiser or Bud Light. After four hours, you could have anything as long as it was Budweiser. The distributor said they based their selection and inventory based on what they thought people  in Apache Junction wanted. Once again, Scottsdale underestimated Apache Junction.

In light of the event being called a Blues and Brews festival, I expected a greater selection of brews. To not represent Four Peaks (now owned by Budweiser) and San Tan Brewery, let alone any of the many other local brews was extremely shortsighted in my humble opinion.

I mean, hell, I can get just as drunk on Budweiser as I can on Kiltlifter, but the drunk is so much more enjoyable if I actually like the swill I am drinking.

Next year I will likely bring in a flask filled with some Jack Daniels. Hopefully the beer selection will be in keeping with a “brews” festival.  And they need more than two beer tents!

As you may have noticed, I did say next year. And I do plan to attend. Growing pains. This event has the ability to grow and mature. Unlike me.