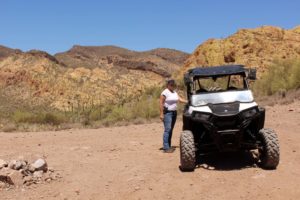 We took the RZR out for a drive Sunday morning to Bulldog Pass.

Bulldog is Arizona’s version of a member’s only club… you have to contact the fire service to get a six month pass. It is free. And only four wheel drive capable vehicles or dirt bikes need apply, your Toyota Camry will not cut it. 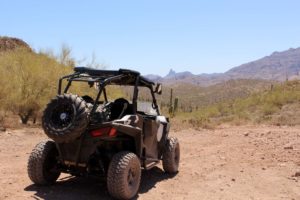 There are four gates to Bulldog Pass. They are the shortcut from Apache Junction to the Salt River.

Bulldog is also a great camping area. No target shooting allowed, for obvious reasons. Even though it is remote and access is restricted to motor vehicles, there are equestrians and hikers. 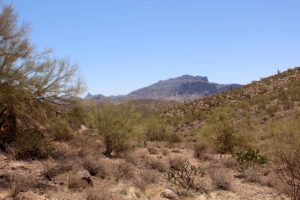 Bulldog Pass is home to the Bulldog gold mine… gold was discovered in this area behind Goldfield in 1914. The mine closed in the 1940’s… it was not a significant mine except to the man who discovered it.

There are some people that believe the defunct Bulldog mine is the Lost Dutchman’s fabled mine. It is likely not. Assayers can tell where gold is from, based on the nuggets the gold is culled from. The Dutchman’s gold was not from any known mine.

The land is now part of the Tonto National Forest, so any gold found in it is government property. But people can dream.