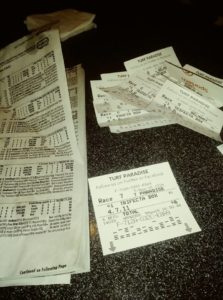 Losers. All of them!

Whose idea was it to have Cinco de Mayo and the Kentucky Derby on the same day?

We hit the Mirage to bet on the ponies. The Mirage is one of two OTB bars in Apache Junction.

I love betting on the ponies. But, I only do it a few times a year. I can see where it could become addictive.

I am smart enough to put $100 to the side for betting.  I do $1 trifectas most of the time, boxed… that is only $6 a bet. One win would pay for the day. I never win. But I write it off as entertainment. Going to a baseball game or a football game would cost as much.

I am good enough that out of all of my trifectas I had two out of three horses on almost every bet. The guy next to me won $1000 on $100 of bets for the Derby.  He had about ten combos that he bet. I only had two bets… one trifecta and one on the long shot to show. He didn’t show.

Cinco de Mayo is not really a Mexican holiday. It certainly is not Mexican Independence Day. But Arizona American Mexicans do celebrate it – it is an excuse to drink. Any excuse.

On my street Mexican music can be heard. This is one of the first times in years that Cinco de Mayo fell on a weekend. They will not have to call out of work tomorrow! Nor will I!