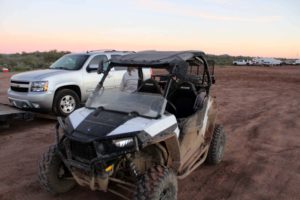 At the staging area.

Saturday we took the RZR on the first real workout since I bought it. My boss lent me his truck, and JD, a friend, lent me his trailer. We went to Lake Pleasant, AZ (elevation 1700 ft.)Our destination was over the mountain, to Crown King (elevation 5900). We went from desert to mountains, from scrub brush and cactus to towering pines. 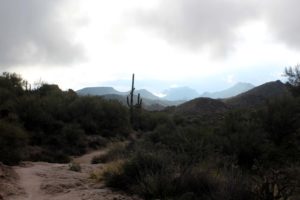 Leaving the staging area, we took improved dirt roads to the Crown King turn off, marked by a boulder painted with a CK.

My boss Jeff has a four seat RZR, he had three passengers. Mine’s a two-seater, just Liz and I. 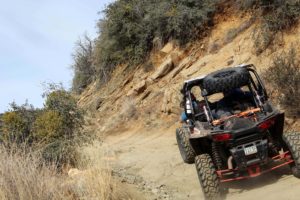 The 25 mile trek took about 3 1/2 hours. Most of the road was just wide enough for one vehicle in what could only be called a road by the utmost optimist.

I learned rather quickly why the bottom of my RZR is covered with skid plates.

We stopped for a bathroom break. Not more than one hundred yards away we spotted a her of deer. We counted at least eight deer. The does grazed as a buck stood in the rear eyeing us suspiciously. We were not very quiet, but the herd largely ignored us.

The landscape is awe inspiring.  The path took us past a sub-development in the middle of nowhere.  About a dozen houses and trailers populated the community. Something tells me that you don’t want to fuck with these people.

Past the “development” we had to ride down a river for a couple hundred yards. This river was near a mining operation. There was heavy equipment there, and for the life of me I cannot figure out how they got the equipment there. 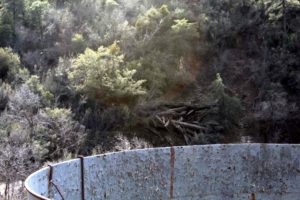 That was when the going got really hairy. We passed abandoned mine shafts in the side of the mountains. Nothing wider than a Jeep could really make it down these roads, so I have to admire of the ingenuity of the people that built mines and water tanks. The mines were largely abandoned in the 1950’s. 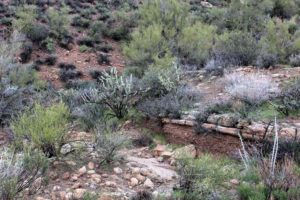 There were two particularly difficult obstacles on the “road” The first one took me a half dozen attempts to cross… 3 foot high boulders across the road. The first attempt I almost slid off the road… that would have been bad news. My boss was sure I was going to flip backwards on my second attempt. That was when Liz decided to exit the RZR and watch me commit suicide. 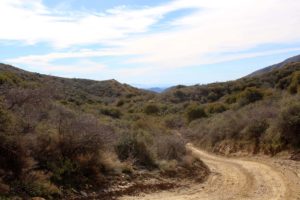 I finally made it, and survived, as you have likely deduced. That’s when Jeff told me that just around the bend was a worse obstacle. Hopefully he will post  the video of this part, since I was not able to photograph it.. for obvious reasons.

Jeff’s RZR has a longer wheelbase, so the second set of 3 foot boulders was more of a challenge. My shorter wheelbase allowed me to just climb up and over.  It was at this point that I realized that we were going to have to navigate these rocks on our return trip! 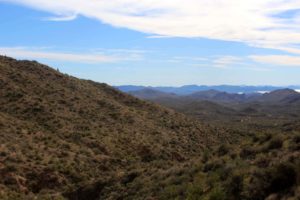 From there on, the road was just wide enough for the vehicles, mountain on one side, and sheer drop on the other. We were now headed upward. The pinnacle of the mountain was 6400 feet. Gone was the dirt and sand, nothing but broken rocks and boulders. 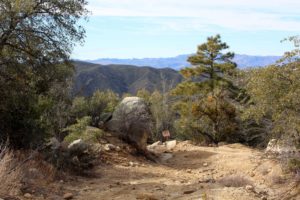 Soon we were looking down at the tops of other mountains. We had reached real trees.. towering pines. The road soon improved… there were actually stop signs at intersections. We were almost to our destination – Crown King.

Crown King is named after the 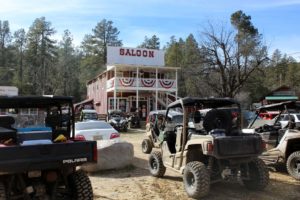 Crowned King mine, the name was shortened to Crown King in 1888. It was once a booming mining town.

Population of 133, in it’s heyday there were over 500 buildings. There is a single gas pump – price is $6 a gallon. If you don’t like the price, go to the competition… um, there is none.

The Saloon is also a hotel. Liz and I had to secure our sidearms in the RZR. The burgers were great, and hospitality topnotch. Burgers were abut $9 each, so they were not raping us on the prices.

It was about 3:30 when we finished lunch, and now had to face the ride back. At least it was downhill most of the way. The weather cooperated the whole trip.  It was an uncommonly warm day, and all of the snow had melted. Which led to a whole lot of mud. 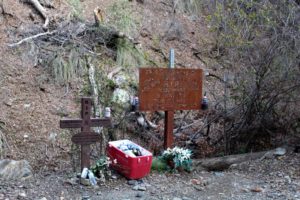 I was sweating the two rock obstacles on the way back. Frequent roadside memorials on the trail reminded us that not everyone made the trek successfully.

Turns out is is easier to go down 3-foot boulders than it is up. I just gunned it and slid down. Thank god for the skid plates. 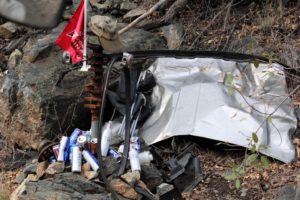 The sun had begun to set as we reached the staging area. All in all it was exhilarating although I would be lying if I didn’t say I was scared a few times. On the way back we saw wild burros grazing on the side of the road. My muscles are still sore from wrestling the steering wheel over rocks knowing that one slip could send me careening off the side of the road a couple hundred feet down.