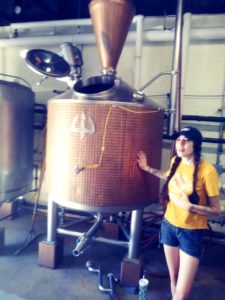 For Christmas, Liz bought us a family gift. It was a tour of a local distillery in Tempe, AZ. Arizona Distillery is a small batch distilling company. They distill whiskey, gin and vodka.

We were shown the distilling process from beginning to end. It begins much like brewing beer… with whiskey it is called mash, with beer it is called wort (pronounced wert). 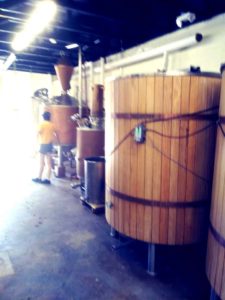 Unlike beer, the grain, whether wheat or corn or rye is crushed into a powder. The grain is mixed with water and cooked for up to eight hours at around 160°F , which brings out the sugars. The mash is then cooled, and then pumped to another container where yeast is added and it ferments until the proper alcohol content is reached. 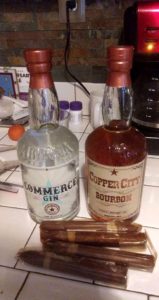 The liquid is then moved to the still. It is then heated and the water stays at the bottom of the kettle and the alcohol condenses and seeps out of the coil, but today they do not use coils like you imagine in old moonshiners stills. Instead, tubes are used, and cold water is pumped around the tubes to cool the vapor into liquid.

The distilled liquor is then aged. For bourbon, the liquor has to be aged in new oak barrels for two years. Rye can be aged in any old barrel for as long as it takes for it to be drinkable.  Whiskey gets its color from the barrels. The barrels are charred, and the oak and the charcoal give bourbon its unique flavor. 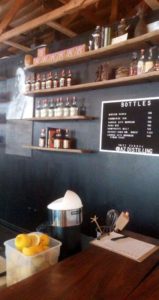 Gin is distilled in its own separate still, as the botanicals that give gin its aroma would contaminate any other liquor.

The tour included samples of the vodka, gin and bourbon. Mission vodka is brewed from Arizona corn. Their vodka is distilled with eight runs, Tito’s vodka, on the other hand is distilled 7 times. This process creates a very drinkable vodka. I am not a vodka fan, but this is a sippable vodka straight up.

Commerce gin, too, is made from ingredients sourced from northern Arizona.  The bourbon is made from corn, rye and barley, and aged less than four years. This bourbon is great served neat, and makes an excellent Old Fashioned. After the tour we enjoyed a drink at the bar, and I purchased bottles of gin and bourbon. 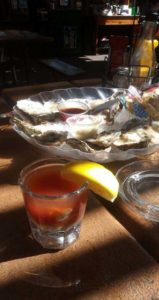 Since we were in Tempe, and only a few blocks away from Casey Moore’s Oyster House we could not resist stopping for lunch. A cold beer, oysters on the half shell, escargot and oyster shooters made for a pleasant afternoon.

We left Casey Moores and headed for downtown Mesa to see an art opening at One Oh One Gallery. It was a fortunate stop, it is quite probable that Liz and I, and some of our friends will rent the space for the month of December. 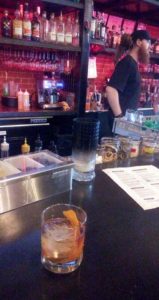 We spoke with one of the artists in the gallery, and she recommended 12 West Brewing on Main Street in Mesa. It was a block away. I had an excellent Four Roses Old Fashioned, followed by a Sazerac. The bartender was a craftsman.

We each ordered a Poke bowl. The Ahi was tender and fresh. The waitress offered us both silverware and chopsticks so we did not have to appear pretentious by requesting chopsticks, or appear to be cretins by demanding knives and forks.

All in all, I spent way too much money today. This might be our new favorite joint in Mesa when we go to the Mesa Arts Center. I have to say, it was a great day!