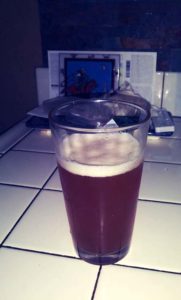 Back in the 1980’s – I am giving my age away – I used to home brew beer. In the day, craft brewing was not yet a thing. The swill I learned to brew was undrinkable by today’s standards.

I began with recipes for pilsners and lagers. My most successful beers were stouts.

My projects yielded at most a case at a time. One memorable failure involved two cases of a pilsner I was brewing. Two o’clock one morning I was rudely awakened by explosions that sounded as if they were emanating from my basement. I cautiously walked downstairs, and “POP!” another explosion just feet away from where I stood. I had made a misjudgement in the amount of sugar to use in the carbonation process. Each bottle had twice the recommended amount , and as the carbon dioxide built up, some of the bottles were unable to withstand the internal pressures.  I lost close to a dozen bottles.  The beer that survived was extra carbonated.

Family, children, responsibilities all got in the way afterward, and my brewing equipment languored in a corner of my basement. Fast forward three decades. Craft brewing is not only a thing, but it is becoming absurd as craft brewers concoct strange elixirs.

My tastes have changed, and I gravitated towards IPAs.  India Pale Ales evolved in the mid 1800’s in England. Beer fared poorly on the voyages from England to the East Indies. By chance, an “October beer” that was brewed with more hops than was standard survived a sail to India. This was the birth of IPAs.

If you were raised on lagers or, God forbid, pilsners, IPAs are an acquired taste. They are recognized by the hoppiness. Today, IPAs are a craze, and there are many varieties. Some are just plain dreadful.

The IPA I recently brewed used Mosaic and Citra hops. Citra is one of the classic hops prevalent in many IPAs. A disturbing trend is to taint the beer with heavy citrus notes. If I want a citrus beer, I will mix a Budweiser with grapefruit juice and make a twisted Shandy.  I don’t want my beer to taste like a fruit tree.  Mosaic hops have a citrus overture. And citra hops – well did you guess by the name? But the citrus nose is due to the hops and not orange peels being used in the brewing process. Too many brewers are heavy handed in their recipes.

Anywho – I brewed a small batch IPA this year. By small batch I mean 12 bottles. Home craft brewing is not a cheap way to make beer. These two six packs cost about $40, and took one afternoon of my time. However, I was able to dictate every ingredient, and I had total control over the process.

The end product is similar to “Fresh Squeezed IPA” from Deschutes Brewery. Most IPAs you will sample today are West Coast IPAs, East Coast IPAs and American IPAs. East Coast and British IPAs are less hoppy, and tend to have more of a malt flavor with heavy citrus notes. West Coast ales are hoppier.

I am in search of a traditional India Pale Ale circa 1840 Sussex, England. Of course I will never know if I have nailed it, one can only dream.