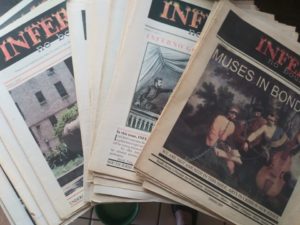 In a former lifetime I published an underground arts newspaper.

The year was 2003. Liz Nicklus and I were heavily involved with the Glasstown Arts District in Millville, NJ. We were on the early board of directors of the Riverfront Renaissance Center for the Arts.

One night at Larry’s Bar, enjoying drinks with Jennifer Lookabaugh-Swift we began discussing how the arts district needed an arts publication. Jenn came up with the name Inferno. 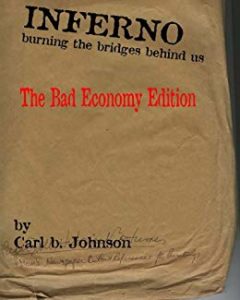 At my then current employment, I was the graphic artist, desktop publishing guru. Having all the tools I needed to do layout (Adobe In Design), I called a contact in the newspaper business and asked about printing. Printing was very affordable. Michael Cagno took the lead as sales representative. Liz began as editor in chief – tempering my tendency towards radicalization.

Soon, the newspaper had a big following. I invited local artists and writers to collaborate. We all did this as an act of love, receiving no pay. Over the entire run I may have cleared $2000 for my work – which required 4 hours a week or more of my time.

As we headed into recession as a country, it affected us locally. Advertising sales declined and eventually we were forced to end the paper in 2009. The paper covered many local controversies, and published stories the local papers refused to tackle.

The best of the paper became a self-published book, Inferno – burning the bridges behind us,  now available on Amazon.com.  The black and white edition is a very affordable $14.99. It features our groundbreaking covers, and the articles that endeared us to so many, and enraged even more.

The full color edition costs a bit more, $40.98. Both books include forwards and introduction by the writers and contributors. You do not have to be from the area to enjoy the writing and articles.

If you enjoy this blog, I do get a portion of every sale, which I promise will be used for something useful, such as paying my bar tab on Friday night.