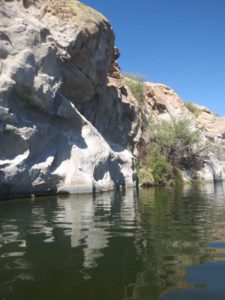 I took a vacation day from work last Friday to go kayaking at Canyon Lake.

It is now the season when the snowbirds will be filtering in, and I wanted to be on the water enjoying a peaceful morning.

Canyon Lake is the third of four man-made lakes along the Salt River. Roosevelt Lake is first in line; the Roosevelt Dam providing hydroelectric power for the Valley.

Apache Lake is next, just beyond Tortilla Flat. Canyon Lake is the most popular for residents of the East Valley, with swimming, boating, and camping amenities. It is a twenty minute drive from my house, which makes it even more attractive. 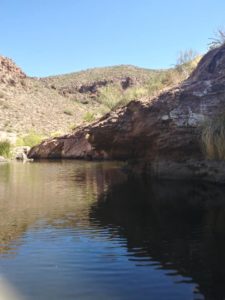 We park at the Boulder Canyon recreation area, basically a few parking lots, bathroom facilities, pavilions for picnicking and a metal dock for fishing. There is easy access to the cove to launch kayaks. No motorized craft are allowed in the cove, so it makes for a peaceful morning on the water.

You can spend a couple hours just exploring the cove. The cove is stocked with trout and bass. Thirty pound carp populate the cove, and a state record 15-lb largemouth was caught there. 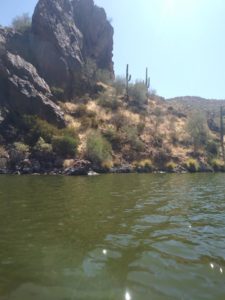 The cove was popular among the grebes, a freshwater bird, this morning. I saw a heron. The cormorants must have been on vacation, as they usually sit on the buoys and markers.

We saw some paddle-boarders and a canoe, and two lone fishermen along the bank.

After exploring the cove all the way to the end where it would have been possible to wade further up the tributary sans kayak, we decided to head to the lake. 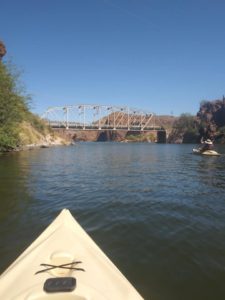 The single lane metal bridge that allows Rt 88 to cross the channel marks the border of the no motorized craft haven. Just beyond the bridge is the marina.

We paddled through the marina and into Canyon Lake proper.  Steamship Dolly was out on the early tour.  There were a few speedboats and people on their watertoys.

We hugged the shore along the swimming area, heading for another cove, at the end of First Water Creek. To enter first Water Creek you have to go under the first single lane metal bridge on Rt 88. 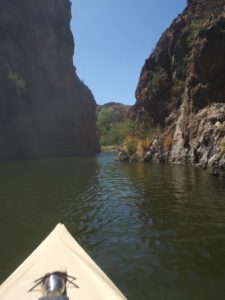 It was here that I saw a Heron, just keeping a safe distance ahead of us as we so rudely interrupted his fishing session.

We were the only boats in this area. Motorized boats are allowed, and often we see people fishing or anchoring on their pontoon boat partying and swimming.

We didn’t see any longhorn sheep, but it was kind of late in the day by this time. In the evening you will see them on the cliffs.

All in all, we were on the water for about three hours. It was the perfect way to begin a three-day weekend for me.

We enjoy Boulder Creek because it is an easy day. I only have to load up the truck with the kayaks, no other vehicle required. We only need to have one Tonto Pass, required for parking in any of the recreation areas.

The lakes are free, and camping in many areas is free. But parking costs $9 a day – we have one lifetime pass. If we take another car, then we need to get another one-day pass. 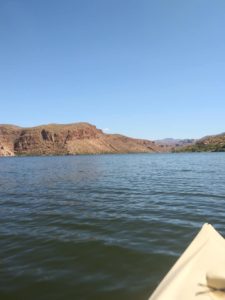 When we take the kayaks on the Salt River, it requires more planning.  We park one car at Granite Reef, then head up river to set the kayaks in. After kayaking ten or so miles, we then beach the kayaks, take her car to pick up my truck so that we can head back and load the kayaks.

The river offers rapids, and we always see the wild horses and a lot more wildlife.  Maybe soon we will do the river, and that will be fodder for a future post.