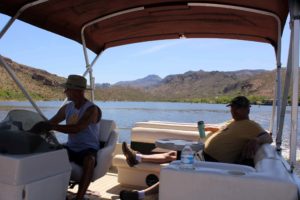 Quarantine is something you do to people that are sick.  This current lockdown is a farce – with scarce scientific data an entire country has been brought to its knees.

Healthy people are being locked away – apparently “my body, my choice” only applies if you are liberal and want to kill an unborn baby. 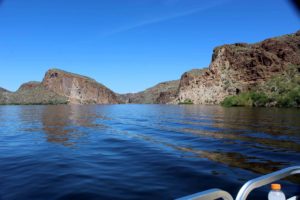 The justification that we could unwillingly infect people that are susceptible if we are allowed to congregate publicly is disingenuous at best.

If you have immune issues, then you have a responsibility to quarantine yourself so that you do not get ill.  Why are healthy people being punished? Why are the deaths associated with the annual flu season being under-reported and minimized when they far surpass the deaths from Covid? Why are flu deaths being reported as Covid deaths? 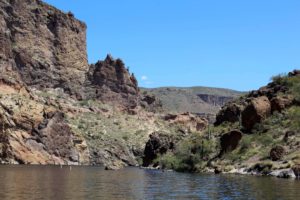 The Small Business Administration announces they are out of money for small businesses as they handed out millions  upon millions to corporations that are publicly listed.

The National Parks are all closed, because god forbid if people that are cooped up in their house or apartment be allowed to get some fresh air, or set their kayak in the Salt River or in Canyon Lake! 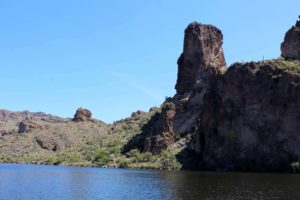 Canyon Lake is closed too everyone except those with enough disposable income to afford a membership at the marina. FYI, slips begin around $400 a month, and boat spaces in the lot are well over $200 a month.

Public parking lots in Tonto National forest are closed off. People are parking on the sides of the road. This is extremely dangerous, these people are more likely to be hit by a motor vehicle than they are to get Covi-19. Whatever overpaid federal bureaucrat made this decision in their cubicle in Washington D.C. needs to be furloughed, they serve no useful purpose and their job is certainly non-critical. 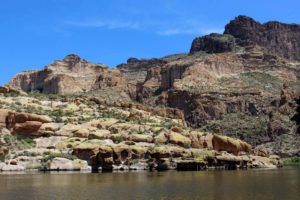 Okay, Rant over. Fortunately I have a friend that has a membership at the marina, and on Sunday we took her pontoon boat out on the lake.

It was a beautiful day. The lake was choppy, as is usual this time of year as the dams are opened to regulate the flow of water from the northern melt. The skies were clear, with only wispy clouds overhead.

We saw ducks and herons in the water. We saw plenty of big horn sheep on the sides of the mountains.

Canyon lake is the third lake in a series of four lakes created by the Salt River Project. The first lake is the northernmost, Roosevelt Lake. Teddy Roosevelt created that first dam. Next is Apache Lake, which feeds Canyon Lake. The Canyon Lake dam feeds Saguaro Lake, and then the water empties into the Salt River which then feeds a series of canals that supply water to the local area.

These dams create hydroelectric electricity for our area.  One cliff face is interesting due to the hundreds of petrified trees that fell millions of years ago, became buried under sediment and are now rock.

We spent six hours on the lake, setting shore at the far end for lunch. It was a beautiful day, and much needed respite for Liz who is stuck at home for a month now. At least I get out to go to work for 4-6 hours a day.

Hopefully this mess will be over soon. Until then we will find ways to get out into nature without trampling on the arbitrary rules that have destroyed our constitutional rights in this country.