The Superstition Mountain Museum is a must see if you are ever in Apache Junction, AZ. It has the only two surviving structures of the Apache Land Movie Studios, a working stamp mill, a scale railroad featuring the history of Arizona, mining artifacts and twelve acres of grounds with walking paths all in front of the wonderful backdrop of the Superstition Mountains. All of this is free to the public. The indoor museum is open for a nominal fee, and provides the  visitor with in depth history of the wild and weird Superstitions.

Before I parted with the postcards, I made high definition scans and reproduced a limited quantity.

I am offering sets of 17 cards (5 are not shown here) for $50 while supplies last. Just contact me at carl at cbjart dot com if you are interested. When they are gone, there are no more. 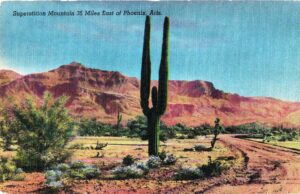 The mountains have a wild history, inhabited by the Salado, Hohokam and Apache tribes. Spanish explorers came later seeking gold and silver.

The famed “Lost Dutchman, Jacob Waltz, did discover gold.  Whether or not he had a mine or pilfered Spanish gold will never be known.  But as recently at the 1970’s Dutch Hunters, the name given to seekers of the Dutchman’s mine, have feuded and killed to protect their claims. To this day wannabe prospectors still seek the fabled mine.

The Lost Dragoons
While nobody knows whether or not the Dutchman’s mine really existed, it is known that there are 24 lost Colt Dragoons hidden in the Superstition wilderness. Of course, the wilderness encompasses  160,200 acres.

In 1871 a military cohort was transporting two crates of Colt Dragoons from Tuscon to Fort McDowell. After they left Camp Pinal near Picket Post Mountain, they were attacked by a band of Apache.  They managed to evade the marauders and his the dragoons in a cave. 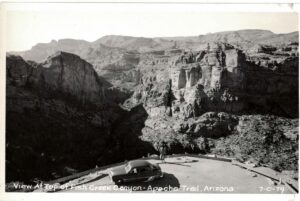 They finally made way to Fort McDowell, gathered up a force of men and returned to recover the weapons, but failed to find their stash. We do know that the revolvers have never been found.  The serial numbers are all listed and available at the National archives.  With a potential value of $1.5 million per gun in the original cases, one would be bound to have turned up if anyone ever found the guns.

The only clues we have are the route the soldiers were taking. Most seekers erroneously believe that Camp Pinal was at Picket Post mountain, but it was actually located at what is now Top of the World east of the town of Superior. They most likely would have been traveling west on the stage coach road which is now Route 60, and then headed north when they reached what is now Apache Junction. Instead, they cut north into the wilderness, crossing washes and through the Sawtooth range. From the cave, there is a tall mound, but whether that mound is Weaver’s Needle, or Miner’s Needle or just an unknown mountain is up to speculation.

Most of these postcards are 50 to 70 years old. The wilderness today is almost the same as it was then. There are still areas that no white man has tread ever. The Apache consider the Superstitions sacred. They to this day do purification rituals to ensure they harbor no evil in their souls when they go into the wilderness.

Until a few years ago, it was possible to drive State Highway 88 from Apache Junction all the way to Globe and Miami, AZ.  A few years ago, wildfires caused all sorts of damage, including the loss of vegetation near Fish Creek Hill.  The road collapsed, and repairs might take a decade or more. Hwy 88 is a dirt road at this point, and as a designated historic highway, it cannot be paved. The vegetation has to be allowed to re-grow so that the side of the mountain will not continue to deteriorate.  With no desert grass and undergrowth, monsoon season causes more erosion.  At the bottom of Fish Creek Hill are dozens of carcasses of motor vehicles that went over the edge. There is no way to pull the wrecks out.

The Claypool Tunnel has been abandoned for 50 years. It is easily accessible on foot, and a new tunnel has replaced it. It was the original thoroughfare through Devil’s Canyon, just east of the historic mining town of Superior. It has been replaced by the Queen Creek Tunnel.

Superior is one of my favorite old towns to visit and spend a day. It has enjoyed a renaissance in recent years, and boasts a historic hotel and a bustling arts district. Mattie Earp, Wyatt Earp’s common law wife is buried just outside of town.  You will need a guide to locate the cemetery which is maintained by family members.

The history of this area runs deep. Many of the old westerns were filmed at Apache Land Movie Studios which were located on the eastern side of the Superstitions. If you see saguaro cactus in a western, chances are it was filmed here.

Elvis Presley filmed the only movie he didn’t perform in at Apache Land, Charro. The chapel featured in the movie still exists, and is located at the Superstition Mountain Museum. It is one of two buildings that survived one of the many fires that destroyed the movie set.

Elvis used to bide his time at Superstition Skies, a local bar that is still open for business. He used to reserve a table in the corner of the bar. He would invite locals to eat lunch with him, and was very nice, according to those that met him.

I hope this piece of history has been informative. I moved to Apache Junction ten years ago, and have not once regretted my decision to become a New Jersey expatriate. This area is just one piece of Arizona, the 48th state, a state with varied landscape and terrain. It is an inspiration to me, as an artist, and it absorbs me with the history of the area.

The Earps, Doc Holliday, Dillinger, Sonny Barger (former president of the Hell’s Angels), Dick Van Dyke, Alice Cooper – all have called Arizona their home. There are many more I have missed. Although George Washington never slept here, John Wayne has.

The heat is “a dry heat”, but dammit it is hot! Monsoon in August gives us most of our precipitation in the Sonoran Desert. I mock the irresponsible outsiders that come here and plant grass for their lawns. We’ve had six days with rainfall so far this year. It has been a wet year, with just over an inch of rainfall in the Valley. Today was the sixth day we’ve seen rain.  We are still in a moderate drought, and we plan accordingly.

Anyway, if you have never been to Arizona, you cannot go wrong visiting any part of the state.  Of course I am biased, but I suggest you begin your visit in Apache Junction.