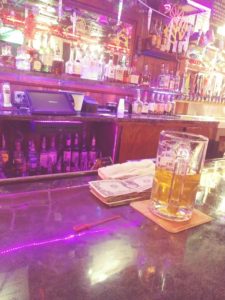 I went to Prescott (pronounced press-kit) AZ after Christmas. Prescott is known for Whiskey Row, once a notorious street populated by saloons and whore houses.  The likes of Doc Holiday and Wyatt Earp walked the streets and visited the businesses of Whiskey Row.

The Hotel St. Michael occupies the corner of the block, and marks the beginning of Whiskey Row. The Palace is next door… the oldest restaurant in Arizona.

The Palace is a tourist trap. I found out the hard way when I waited fifteen minutes at the bar to not be served. 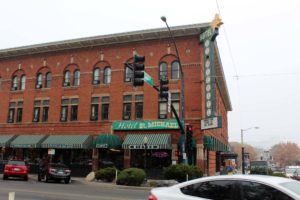 More on that later. A two and a half hour drive from Apache Junction, Prescott is at 5,000 foot elevation. having lived in the Sonoran Desert for seven years, I forgot what cold is.

Did not see any snow accumulation, but it was flurrying when we arrived. The art galleries were awesome, not the usual cowboy art I expected to see. Yes, there was cowboy art, and desert scenes as expected… the art was of high quality. But I was surprised at the amount of eclectic, weird, strange, dark and disturbing art on display. 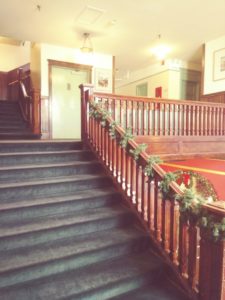 The hotel is a historic landmark. The original Burke Hotel burned down, along with the original Palace restaurant and the rest of Whiskey Row in 1900. The Palace burned twice.

The existing Hotel St. Michael was built after the fire of 1900. The scary elevator was installed in 1925; it was the first elevator in Prescott.

After settling in the small but nicely accommodated room, I was ready for a stiff drink. I had to visit the Palace Restaurant. On the historic register, the restaurant is beautiful. I sat at the bar and waited for the bartender to serve me. After about ten minutes, she finally apologized for making me wait and asked me for my order. I was ready to buy the overpriced draft and an overpriced shot, and order food. I asked about the beers on tap, and she gave me a sample of one of the beers.

I watched as she served another ten drinks. She never returned to take my order for my first pint. Fifteen minutes, she served other patrons, washed dishes, served more patrons, and walked by several times. I left.

Two doors down is the Whiskey Row Pub.  Walking in, a disreputable looking patron said, “This is the best bar in Prescott.” Cash only, pay as you go, the bar was filled with locals. Great music was playing on the juke box. The bartender immediately served me. All beers on tap were two for the price of one. My kind of bar. 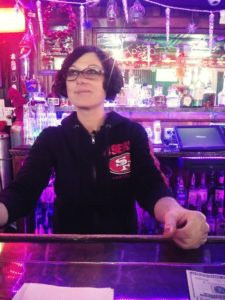 The whiskey was affordable. My glass was never empty before Janette was there with a refill. It was not long before I realized that this was going to be my next bar painting.

Prescott is a sort of anti-snowbird destination. Apache Junction, where I live, is snowbird central during the winter. Birds flock from Minnesota and Wisconsin to escape the cold. Our population triples during the winter. Prescott is where those of us that live in the valley escape in the summer when our temperatures hover above 100°. Of course I would go in the winter when the outside temps are nothing but frigid. Sort of like my ex-wife. 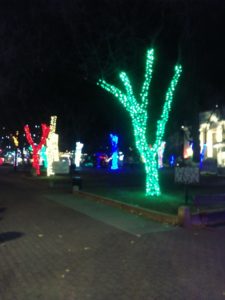 The courthouse is decorated for the holidays. I was able to walk outside for about five minutes to admire the lights… the lights are beautiful but give me a warm bar with cheap beer!

The trip was worthwhile. I purchased a couple pieces of art by a local artist. And I discovered a great dive bar in the middle of a tourist destination. Next summer i might have t figure out a way to spend a week in Prescott. I have a feeling that much of that time will be in The Whiskey Row Pub.