Last week we took a road trip to the southern part of this truly sometimes weird state of Arizona.

As a young adult I followed the Biosphere 2 saga. Biosphere 2 was an exciting undertaking. I completely sealed building with rain-forest, ocean, marshland and desert environments.

Construction was possible to Bucky Fuller and his invention of the geodesic dome. Built on a steel bowl the Biosphere was able to be completely sealed from the outside environment. Scientists lived in the environment for two years.  The experiment was supposed to have scientists doing two year stints – but was called off because they were spending 12 hours a day merely surviving. There was no time left to perform experiments.

It is now used for scientific research such as developing a strain of coral that is resistant to extreme heat, making it possible to repair the badly damaged coral reefs. There was too much science for Liz, but I found the tour to be highly educational. 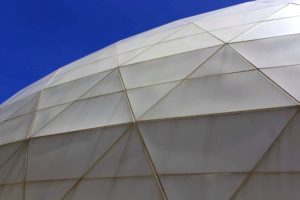 The experiment fell victim to spurious stories by a biased media that falsely claimed that the scientists inside were ordering take-out pizza and leaving and entering as they pleased. However the hardships they endured during that two year stay are a warning to the hardships that will be encountered as we attempt to built on the moon and/or Mars. Survival will be the top priority, and scientific research will have to take second place. 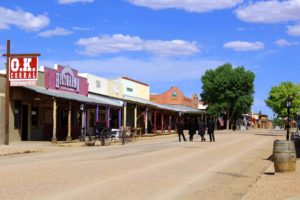 After our educational part of our road trip, we headed to Tombstone, AZ and the O.K. Corral.

Our first stop in Tombstone was at Boot Hill. Most of the grave markers are real, having been restored but mostly original. The Clanton’s make it apparent that the kin believe it was outright murder. Many historians agree that history has been rewritten to make the winners of the infamous gunfight out to be heroes. 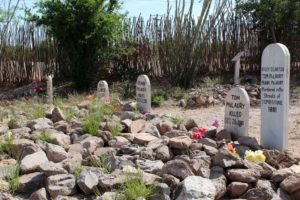 The Earp brothers were western hoodlums. The gunfight at O.K. Corral was a slaughter, not that either side was innocent.

Much of Tombstone is as it was in the days of the untamed west. We had lunch at Big Nose Kate’s, the infamous bar/brothel. Kate’s take on the New York Reuben was delicious… sauerkraut in place of coleslaw.  Tombstone was the county seat of Chochise County. Today the county seat is Bisbee, one of Arizona’s many copper mining towns. That was out next stop.

We stayed at the Copper Queen, the oldest continuously operating hotel in Arizona. The is no way to lock the double swinging main doors. There has always been staff on duty since 1902.

John Wayne, Lee Marvin, Lee Remmick Nancy Reagan and many more have stayed at the Copper Queen. Some visitors have never left. There is on prostitute that died in one of the rooms, that appears only when men are lodging in that room. Sadly, she didn’t visit me.

Bisbee has many ghost stories. The City Park was once a mass burial ground for children that died of Typhoid, during the turn of the 20th century.

One day a school had a day trip, and the children were playing in the park. When it was tie to leave, the kids wanted to continue playing with “those other kids”. There were no other kids. When questioned further about the other kids, the children pointed to the concrete bleachers and said the kids came “from under there.”

There is plenty of modern day weirdness in Bisbee. Many buildings feature huge flies on the facades.

What is the significance? Flies carry typhoid. Back to the story of the dead children, Bisbee was looking for a way to stop the spread of typhoid. A contest was held in 1912… kill as many flies as you can, in whatever manner you can. The winner that kills the most flies will be the grand prize winner.

The grand prize winner killed 500,000 flies. He won $10. The flies continued to multiply. They eventually learned not to throw sewerage into the streets, and the epidemic finally ended.

We wandered the streets. There were quite a few eclectic  outsider art and graffiti displays. One alley featured hundreds of original paintings and pieces of art. Fences and buildings were covered from street to ten feet up with art. The odor of gange permeated this alley. Can you say “contact high?” 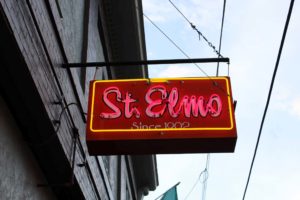 We retired the evening at the oldest continuously operating bar in Arizona, St Elmo. Opened in 1902, it started life as a bar and, imagine this, a brothel. During prohibition they stayed open by serving soft drinks… yeah, right!

Darcy was our bartender that night. She gave us the nickel tour. The top of the bar has a peaked roof. That roof used to be the roof of a house down the street. St Elmo needed more rooms for the whores, so they cut the top off of a house and put it on the roof of St Elmo, creating more bedrooms.

St Elmo is sure to be my next bar painting. And I already have plans to return for a Thursday night.

Our night at the Copper Queen was uneventful. My sleep was not interrupted by the whore ghost. After breakfast, we headed out of Bisbee and to our next destination, the Mission San Xavier del Bac. 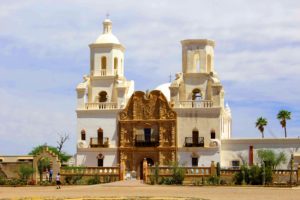 We headed west back to Tucson and then south down Interstate 19. I-19 is the only highway in the United states that is on the metric system. All of the markers are in kilometers. Thankfully the speed limit signs are still in MPH!

Jimmy Carter decided to lead the charge into the US adopting the metric system. I-19 was his starting point, a highway south of Tuscon that went into the Tohono O’odham reservation. Once again we forced our will on the natives! 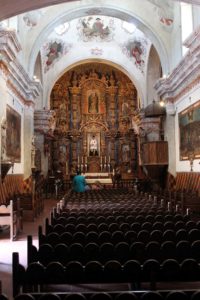 The San Xavier Mission was built in the 1600’s by Franciscan monks in the middle of an inhospitable territory. Fending off Apache attacks in what was still Mexican territory, the monks built a massive mission in the Tohono O’odham nation.

Today a major restoration is taking place. Conservators from the Vatican and Europe are leading the way in preserving the mission. The few photos I share here can not even begin to evoke the awe that one senses when entering the sanctuary. 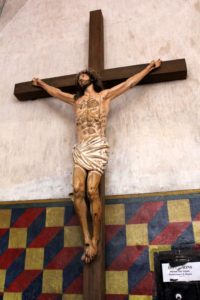 Every mural and statue is being painstakingly restored by hand. The mission is a working church, and I witnessed parishioners lighting candles and praying.

Liz kept me away from the holy water, she was afraid I would ignite if it touched me.

St Francis Xavier was founder of the Franciscan order. Along with St Ignatius, he took an oath of poverty. St Francis was known for his ability to communicate with animals. 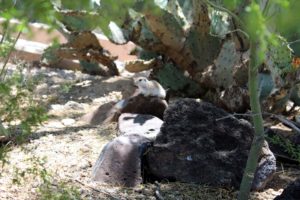 As we wandered the grounds I spotted aground squirrel. It saw me and hid. I talked to it, and said I wanted to take it’s photo. As I was talking to it, he (she?) came out of the hole and posed for me.

A fitting end for our weird road trip. We had lunch at the cafe on the grounds, an Indian cafe. Stomachs full, we had an uneventful drive home back to Apache Junction.