I was fortunate to be invited to a sacred Apache ritual by the godfather of the girl who was to become a woman.

The Apache Sunrise Ceremony is a four-day arduous ceremony that Apache girls participate in after their first menstruation.

We were allowed to participate on the fourth day. The ceremony commences at sunrise, and consists of sacred dance. Four hours of dancing, and my body was sore all over. I can only have admiration for the girl, she danced for four days. 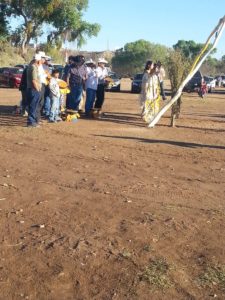 People have asked me about the photos. I asked a tribal elder, and he said feel free to photograph any time the Apache were taking pictures. He admonished me, “Don’t be a tourist”. Nobody was allowed to photograph the medicine man, Apache or otherwise.

It is rare for a “white eyes” to be invited to one of these ceremonies. Liz and I are friends of the godfather, Ken Duncan, who is an upstanding member of the San Carlos Reservation. Upon entering “the rez”, the welcome center has a sign proclaiming, “Welcome to the world’s longest operating concentration camp.” 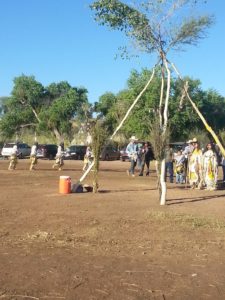 We began the morning drinking Apache coffee and eating breakfast with the family and guests. We brought a case of soda as a gift… food, blankets and useful items are appropriate gifts.

The “clown”, one of the Crown Dancers, opens the ceremony by running along the camp, chasing away evil spirits.  The clown maintains order during the ceremony. If you are sitting during a holy ritual, he will prod you with his stick. 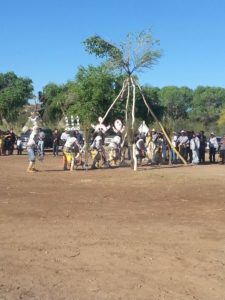 The Crown Dancers opened the ceremony with many sacred dances. We were allowed to join in, forming a large circle around the young maiden.

The ceremony included every member of the tribe offering corn pollen to the crown dancers.

The dancers then dance around the girl, who is dancing in place the entire time, and throw the pollen on her. Then the godfather dances while covering her until she is completely covered. She is becoming the mythical White Woman. For a better description of the ceremony and its importance, this site is excellent. 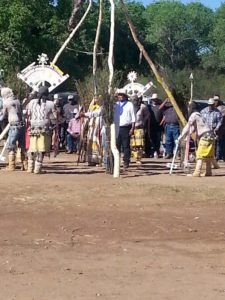 After the medicine man blesses her, she and the godfather then dance and throw pollen on the audience.  I was fairly covered, which is good luck. The spirits must have been smiling on me. It is bad luck to clean up until night, so later that day at the pub I suppose I got some strange looks.

The maturity dance and every other Native American dance was outlawed in the United States in the early 1900’s over fear and misunderstanding. The dances were held in secret, and thankfully did not pass away from memory.  A 1978 law affirmed the rights of Native Americans to practice their sacred rituals.

Having been invited to participate in the ceremony was certainly one of the highlights of my life.