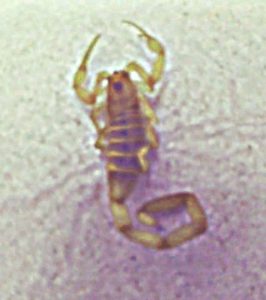 We have been in this house for going on eight years. This is only the second scorpion we have seen here.

He is about an inch and a half long. The males can grow to over three inches in length.

Unlike the scorpions you have seen in TV shows and movies, these fellows are much smaller, but also quite venomous.We thought this one was dead as he was curled up when we found him. I had just applied insecticide in our bathroom. When I tried to pick him up he awoke and began moving. He was just having a nap, apparently.

The Bark scorpion is native to Arizona, southern California and Northern Mexico – also know as the Sonoran Desert. The most venomous in North America, it is still not all that scary. Only two deaths have been recorded in Arizona since 1968. Thousands are stung annually.

A bark scorpion sting is about as dangerous as Covid-19.  Those vulnerable are small pets, infants, the elderly, and those with immune deficiencies. If you are stung you will experience symptoms not unlike the flu for a few days. And you will learn to be more careful in the future.

This guy is about to be incorporated into my latest found object sculpture.