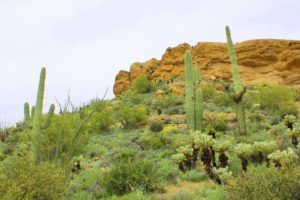 Covid-19 closed our favorite bars and restaurants. All public venues are closed. Liz and I decided to try our luck in Tonto National Forest hiking Second Water.

I have never seen so many vehicles on the stretch of road leading back to the Second Water trailhead.  While the trail had more hikers than we are used to meeting, it was not very congested. 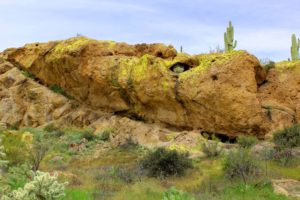 We have had an inordinate amount of rainfall this season, and the wilderness was greener than I have ever seen.

Wildflowers abound along the trails. We saw a brilliant red Cardinal – he was too quick for me to catch a photo, as was a lone Harris Hawk that flew by. We startled a gopher snake who quickly slithered into the brush and disappeared from sight. The Western Diamondback was more stubborn, refusing to move from his resting spot. He posed for a photo op, but quickly grew annoyed, and coiled up and rattled a warning that he wanted to be left alone. 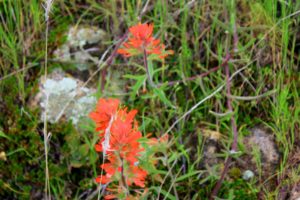 First Water and Second Water were flowing freely.  The desert was lush with greenery and all sorts of wildflowers.

Today’s hike was a short one by comparison – but both Liz and I have not hiked in quite some time.  We took our time on a 2.27 mile hike, stopping often for photo opportunities. The elevation gain was only 166 feet.  My app says I burned 323 calories, but I am sure it was more as I was packing a 25 pound knapsack. 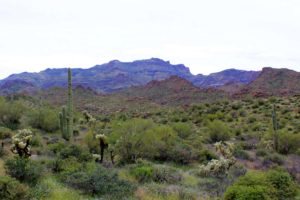 The weather cooperated, the sky staying partly overcast all day.  The temps never reached the 80’s. Even so, I did break a sweat… although the elevation gain was slight, it was concentrated in certain areas, not gradual.

The pollen count is extremely high this time of year, and that exacerbated my asthma. Even so, I had little difficulty with the hike. It might have been quite different if we had attempted a different trail such as Black Mesa. 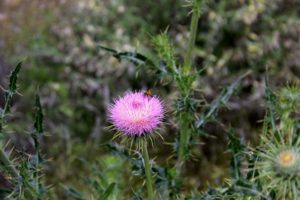 It was a pleasant way to spend a Sunday, this being my preferred religious service, in nature.

It is said that for every rattlesnake that you see, you passed 10 more that you never saw. I mentioned earlier the Western Diamondback that was kind enough to pose for photos. 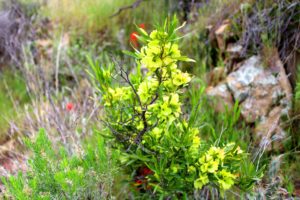 Fortunately none of the hikers antagonized or harassed the one we saw. I am always vigilant when hiking, and am usually the first to spot a snake.

Most Western Diamondbacks are lethargic. They only want to be left alone, and strike only when they are in fear. If you step on one, expect to be bit.  The one we spotted today was small, about 24-inches long.  But he was mature, I counted about 6 rattles on his tail. You can identify a mature Western Diamondback by the white and black rings on the tail before the rattles. 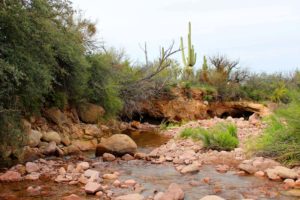 This fella had a few years under his belt. He stayed close to a populated trail, so he was not shy. But he was not going to leave his little home, he rattled when necessary to warn people away. Often rattlers will just leave. He coiled when approached too closely. 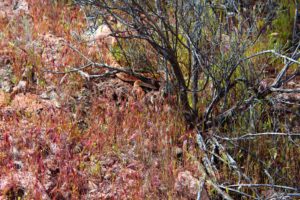 Masters of camouflage, you will not see most snakes you pass while hiking. It took some Photoshop magic on my part to edit this photo so that you can see the bugger.

I got this shot off before he coiled  and rattled and told me I was infringing on his personal space.

All in all it was a wonderful hike. Tomorrow I will be back to the old grind.