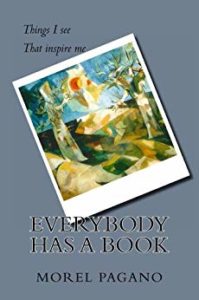 The second book I published, after my own, was a gift to Morel “Mo” Pagano. It too was a compilation of articles originally published in Inferno newspaper. It was titled Mo Knows.

The book was a surprise and a birthday gift to him.

I have never had traditionally usual friends. Usually only one or two close friends. Mo was in his 80’s when we met. He became Liz and my best friend in short order.

After Mo Knows, I published two more books for him. These two had his full consent and cooperation. He handed me handwritten pages scribbled with notes. I interpreted and laid out in proper format.

Mo gave me full rights to all of his books. He only wanted enough to give to friends. I am now working on a posthumous book that includes all of the notes and original content of letters, photos and obscura in remembrance. Hopefully I can convince some of the original contributors to Inferno to also write about the Old Man.