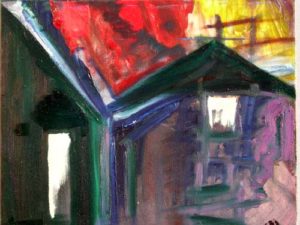 Back in New Jersey, the house was huge. The house was an Italianate style with two living rooms, three bedrooms (we only used one at a time) main staircase and servants stairs in the rear, two full baths, one with a jacuzzi, and a breakfast nook that I used as my studio space.

That space was cramped, so I took to setting up my easel on the rear deck and painting. This came with some difficulties at night such as it was so dark I could not see the canvas.  This oil on canvas was done in the dark at sunset.