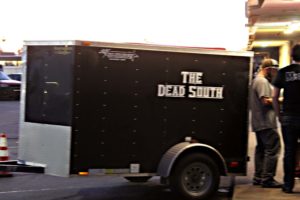 Last year, Stephen, a guy I work with, called me over to his computer and told me I had to listen to this band he discovered on YouTube. That band was The Dead South.

I assumed the band would be from Georgia or Arkansas or something; was surprised to find they are from Saskatchewan. Bloody Canadians. They toured extensively in Canada and Europe, but never the USA.  When I heard they were going to be in Tempe, AZ I bought tickets. The venue, the Yucca Tap Room sold out almost overnight.

he Yucca Tap Room is a bar that has music every night. Usually there is no cover charge, but when they have popular acts, they do charge admission.  The Dead South is doing a short tour of the midwest and west. 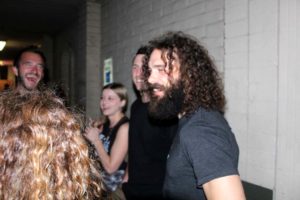 We arrived early, and had a spot in the front of the line. The crowd at the very front was comprised of friends of the band. The lead singer hung out in line as we were waiting for the doors to open.

We found a seat at the bar adjacent to the stage. Food was excellent and service was prompt even though the house was packed.

The first band on stage was The Haymarket Squares, a local punkgrass band out of Phoenix. Some of the songs were a bit too political for my tastes, but musically they were excellent.

Second up were the Hooten Hallers, a punk band from Colorado. A trio with a percussionist, a guitarist and the girl on baritone sax and bass sax. They were tight and the band sounded like there were more than three musicians.

The Dead South headlined. Guitar, Bass Cello, mandolin and banjo… they played all of the crowd favorites.

I enjoy seeing bands play at large venues, with excellent sound and acoustics, but nothing can beat the intimacy of a small room. Sure, the acoustics at the Yucca Tap Room leave much to be desired. But after the band played, the musicians mingled with the fans. It takes a lot to keep me awake after 10pm anymore, let alone in a bar till after midnight.

Next month I will be seeing David Byrne of the Talking Heads in Mesa. In May we have tickets to see The Outlaws and Lynyrd Skynyrd.