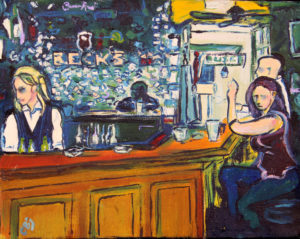 Absinthe was the drink of choice of Toulouse Lautrec and Vincent Van Gogh, among other well known alcoholics.

Only recently made legal once again in the United States, it was also the drink of choice at the Old Absinthe House in New Orleans prior to prohibition.

When I spent a week in New Orleans after Hurricane Katrina, I spent my afternoons at the Absinthe House on Rue Bourbon. The day time bartender was Wendy. She came to NOLA from Chicago.

It is rumored that Andrew Jackson met with the pirate Jean Lafitte at the Old Absinthe House to help end the war of 1812. The original copper topped bar survived Prohibition, having been stowed in the basement during the purge caused by hateful alcohol abolitionists.