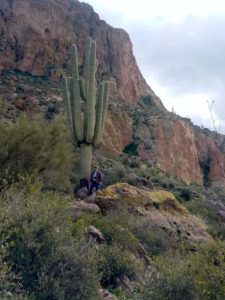 Picket Post was an Army outpost built in 1870 during the height of the Indian Wars. An outpost lookout for Camp Pinal, it served to protect the camp and the Silver King mine from Apache raiders.

Located just outside of Superior, AZ, Picket Post Mountain is full of history.

The recorded story is the soldiers transporting the guns were attacked by Apache at the narrow in the trail by Queen Valley. They were chased back towards Picket Post Mountain before the sergeant shot and killed one of the attackers. They then found shelter and cover for the night, and decided to hide the crate of pistols they were transporting so that the Apache would not get them.

They reported that the pistols were hidden in a cave near a point, near a prominent point. This was Queen River, so they could not have been talking about Weaver’s Needle, another prominent point in Superstition Mountain legends.

The guns would have been coated with cosmoline or another grease, and so would likely be in good condition if found. Fortunately this mystery is not very well known, and so there are few people actively searching for the cache.

This weekend I was not searching for the lost Dragoons. We wanted a change from our traditional hikes to the Massacre Grounds or First Water or the Hieroglyphic Trail. We also hoped to see wildflowers.

The fall and winter has been a fairly wet season. This generally bodes well for the wildflowers in the spring. Lupines grace the highways, and there are a few pockets of desert poppies and desert daisies. Unfortunately we didn’t see any vast fields of flowers. But we did get a nice strenuous hike in, and enjoyed a wonderful view of the Superstition Wilderness.

We were a couple hours in when we noticed storm clouds rolling in from the north. The Superstition Mountains turned black. Local know that when the Superstitions turn black, rain is coming.

It started to rain by the time we reached the trailhead. We saw cloudbursts in different areas around the mountain. We had gotten our morning constitutional in, and could now head to Porters for a few beers and lunch without any guilt!

Porters is a mall bar in Superior. We owed it a second chance after a really bad experience last year. The service was so bad that we never were served a second drink because the bartender was so wrapped up in talking with her friends on the other end of the bar to even consider glancing around to see if anyone required service.

We actually had to flag down another server so that we could pay our tab. This was the first time in 15 years that I did not leave a 20% tip. I left a 10% tip knowing that she had to tip out the cook staff, and her lousy service was not their fault. 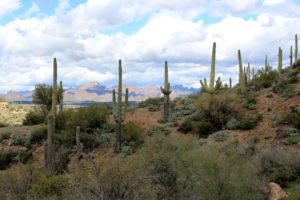 In Porter’s defense, we did visit on a day that Superior was holding a large public event. The bar and restaurant was packed to overflowing. That doesn’t excuse her inattentive service.  So we decided that before we left a lousy review on Yelp, we would visit on a normal day. 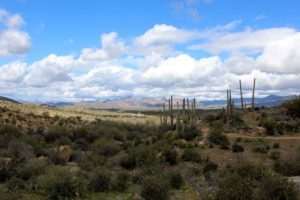 The bar was packed this past Saturday. There were no empty tables, and even though it was quite chilly outside, the outside tables were filled, I imagine by snowbirds who have a higher tolerance for the bitter weather.

A newbie bartender served us. Service was not fast, but the bar was packed, and at least we did get service. We ordered burgers and fries… burgers were cooked to order (medium rare for both of us) and delicious.  We were in no hurry, and our beer glasses were kept filled. 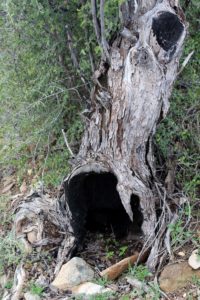 Queen Creek was filled with rushing water, this was the first time I saw water in the creek.  In the Sonoran Desert, most of our “rivers” and “creeks” are dry beds except for the few periods that we experience intense rains.  The rains this year have made the mountains lush and green.

The drive home was uneventful, and the bed was welcome that night. Life has been so busy that we have not hiked as often as we used to.