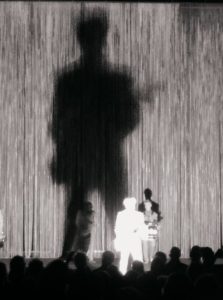 Saw the David Byrne Utopia Tour in Mesa Arizona. For those of you that remember, Byrne was founding member of the Talking Heads.

I saw Byrne ten years ago at the Tower Theater in Philadelphia. Well, actually it is in Upper Darby, but nobody not from the Philly area knows where Upper Darby is.

When we heard that he was going to be in Mesa, Liz immediately got on line when tickets sales opened, and got us two seats in the orchestra pit center stage. $100 a ticket, and minutes later the show was sold out.

If we hadn’t gotten the tickets when we did, we likely would not have seen the show.  Tickets were selling for our section at $500 a seat this past week.

I liked most of the music, but Perfume Genius left me out in the cold. His theatrics were a little too flamboyant for my tastes and the lyrics were a bit depressing.

After the 45 minute set by Perfume Genius, there was an intermission for set change. We took advantage of the break to hit the liquor line and refuel.

The Mesa Arts Center is pretty well run, but the management underestimated the number of people drinking. There were two stands, each with 20 minute waits to get refreshments.

We still managed to get back into the auditorium just before David Byrne took the stage.

The set was sparse, a table with a brain at center stage, and strings of beads around the perimeter that rose from the floor to the ceiling as Byrne took a seat at the table.

He started off with a slow song from his new album, “Here”, as the wall of beads elevated to the top. The song was about how the brain processes the world.

He then segued into I Zarimba as percussionists and singers entered the stage. He went back and forth between well known Talking Heads songs and familiar solo songs, almost all co-written by Eno, before launching into a set list of songs from American Utopia.

Byrne was barefoot throughout the performance, and all of the members of the troupe wore color coordinated suits. They, too were barefoot, or wore flesh colored slippers.

I have the CD, and found the CD itself to be a bit uneven. The songs live all had a power that most do not have on the recording, but then that is the way it is with most studio recordings. The choreography was amazing, and there was never a misstep or awkward drum beat, this performance was as close to perfection as you can get.

Everybody knows that David was an art student that sort of wandered into music while at art school in Rhode Island. What is less known is that he was torn between art school or engineering school. I think the wold is better off with his talent as a musician than an engineer… a degree in engineering could only have served to kill his creative tendencies.

Many of the songs were subversively political, but at least he did not go rabid as is the wont of too many artists these days.

Two encores before the show ended, and my only complaint is that he didn’t perform Life During Wartime. He did play Burning Down the House and Toe Jam, and both songs had the entire audience on their feet and dancing.

All of the musicians were given ample stage time to display their talents, and you could see that he did not feel upstaged at any time, but thoroughly enjoyed the immense talent of relatively unknowns he recruited for this tour.

He is a performer of course, but I felt that he and the entire troupe were enjoying themselves during the concert.  I have seen too many concerts where the performers gave off a vibe of doing a job. When it becomes a chore, perhaps it is time to retire and rest on laurels.  At 65 years of age, he seemed as vibrant and full of energy as ever. If you have never seen him perform live, spend the money on a ticket. You will not be disappointed.