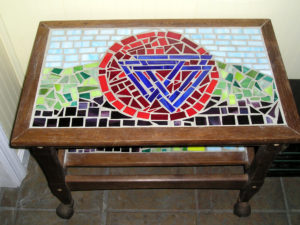 What do you do with an old table that has really no purpose? Mosaic it!

I focused on geometric patterns on this first table. I based the background on nature… sky, earth.

Wood is tricky to mosaic on… it expands and contracts based on humidity. The terrazzo  has to be adhered with mastic. Sanded grout is best. 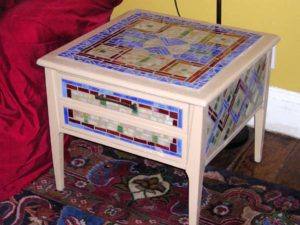 The other table I did was a crappy pine end table. It was so ugly, no amount of refinishing or paint would have helped it.

One year during Artists Open Studio Tours I didn’t feel like painting. When I paint I get covered with oil paint and turpentine and linseed oil. And my paintings often do not make sense until they are completed. So I decided to mosaic an ugly old table. 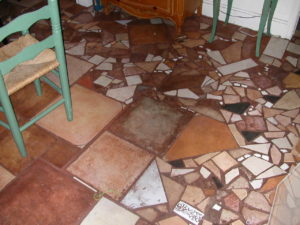 We had a floor that was bare plywood. Money was at a premium, when is it not?

We had tons of sample tiles from tile stores, but not enough to tile a floor. What to do? 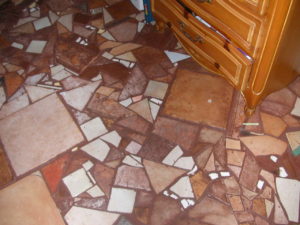 Being artists, we did what an artist would do. We tiled the 16′ x 20′ floor one day with broken sample tiles.

It took one day to lay the tile, and one day to grout. We chose mostly natural colors, with a few colorful tiles in between.

The tiles were free, we had to buy the thinset mortar. For under $100 and a couple days of intense work, we had a masterpiece. 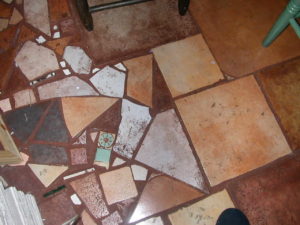 You don’t have to be rich to look like you can afford a work of art on your floor!

This was the first project I did with mosaics. It was not long before I was doing large scale public installations.

Everything has a beginning.

I was requested to show some paintings that were not from my bar series.

I did some paintings, mixed media on board.

I wanted to paint nudes, but not the typical nudes. Flowers as vaginas had been done, much better than I could ever do. My previous nudes were lacking, a little stiff. I do not do realism that well, not what I enjoy painting. But I can delve into abstract realism, and this is one of my attempts. 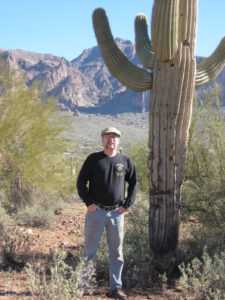 On our last day in New Orleans, last trip, we stumbled into a bar on the outskirts of the safe district.

This was after hurricane Katrina all but wiped out the birthplace of jazz. Bourbon Street was still half vacant.

The Erin Rose was a local joint. The bartenders and dancers and employees of other NOLA establishments began or ended their day at the Erin Rose. They did not cater so much to tourists as to locals… my kind of dive.

Jack was a bartender with ESP, he knew exactly what you wanted before you asked. We had intended to have a few drinks before our flight left. We have a habit of arriving at the airport two hours before our flight leaves.  We leave nothing to chance. Jack changed all that.

You see, the bartenders at the Erin Rose had a contest going to see who could make the most people miss their flight. The night before, they held a bachelor party captive, and the entire party missed the wedding. All in good clean fun.

We watched as locals came and went, preparing for their shifts or ending their shifts. Yet we stayed. Finally, Liz was the voice of reason and ended our stay. I wanted one more round, and jack agreed. Liz won. We arrived at the plane just as the last passengers were boarding.

When our flight reached Dallas/Fort Worth, we were still drunk. We barely found our connecting flight. When we landed at Philadelphia International Airport, we were still a bit inebriated.  But we made it home in one piece.

As much as I like Jack, I am glad he lost that bet! 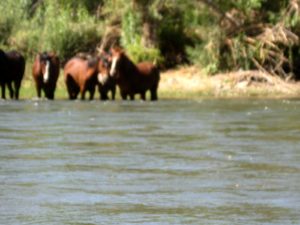 Wild horses on the Salt River. Not the best photo, but my cellphone is wrapped tight in waterproof case when we go kayaking.

You don’t think of rivers when you think of the desert, but the Salt River flows through the Sonoran Desert in Arizona. 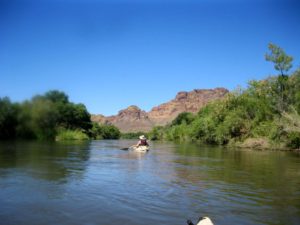 These horses date back centuries, and are protected. They are not afraid of humans, and will walk by as we kayak.

The Salt River provides hydroelectric power to the valley. 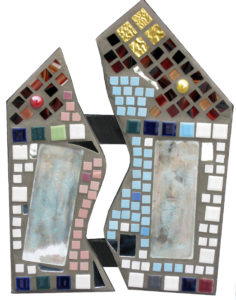 Mixed media, found object piece. A local gallery had an exhibit where we were given a piece of wood shaped like a house. We had to turn them into a piece of art.

I laid old photographs under glass and mosaic-ed the rest.  I usually don’t get involved in these types of shows, but as a board member I was sort of obligated.

This was a personal project.  We owned a house built in the latter part of the 1800’s.  The house was an Italianate style Victorian house.

Two living rooms, two bathrooms, two staircases (one for family, one for servants) three bedrooms, the house was huge.

The dining room was almost 20 x 20 feet. It had carpet over plywood… we did not know what was under the plywood.

Our friend, Norman, worked for a lumber supply company. They also sold floor tile. Every year the displays were replaced. Norman gifted us truckloads of old tile displays.

These tiles became our mosaic floor. Who says you can’t do a house on nothing?