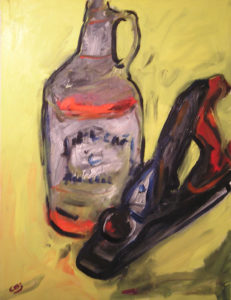 One of my larger paintings done at 3AM.

Sometimes a painting does not have to have a meaning. I paint because I have a compulsion to paint. I use whatever is laying around the house… in this case a bottle of bourbon I was drinking and an antique plane from my collection of old tools. I am an old tool, so it is only fitting I collect old tools. 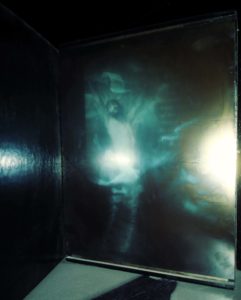 No matter what I do, I can’t get a good photo of this piece.

It is a cigar box, painted black. Inside is a panting of the crucifixion. In front is a glass with an X-ray of a skull. 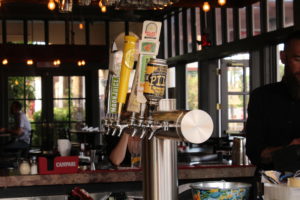 When I was young I used to go to church.

Church is the house of god. But the bible says you are a temple… so any time I am with myself, then I am at church.  END_OF_DOCUMENT_TOKEN_TO_BE_REPLACED 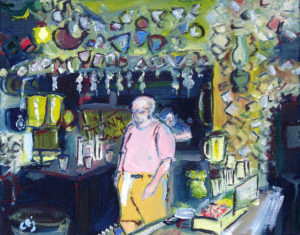 In Key West, I have three favorite bars. The Green Parrot is number one, when I am there they charge me local’s prices, because I act like a local, not a tourist. If I could live anywhere in the world, Key West would be my first choice. My liver would not survive.

END_OF_DOCUMENT_TOKEN_TO_BE_REPLACED 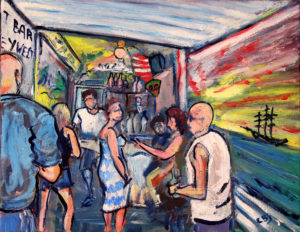 The Smallest Bar in Key West is a garage on Duval St.

I like the place because it is so small, you cannot but help to get in conversations with others. I always meet people from other countries. Even with language barriers we have great conversations.  END_OF_DOCUMENT_TOKEN_TO_BE_REPLACED 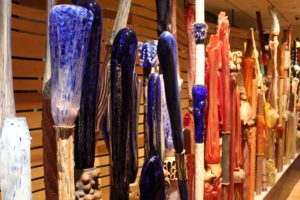 The Heard Museum in Phoenix, AZ has a large collection of ancient and modern American Indian art. END_OF_DOCUMENT_TOKEN_TO_BE_REPLACED 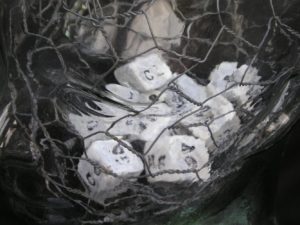 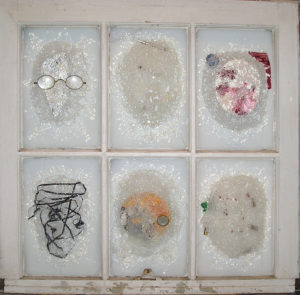 Faces in the Window

Da Vinci Art Alliance in Philadelphia had a group exhibit. One of the members had all of the windows in his South Philly row house replaced, and offered the old windows to the gallery for a challenge.

Every member was allowed to select a frame, and use it in an art piece.

The faces on my window were made with hot glue over a glass head. I then added found objects from my neighborhood, including used syringes, spent bullet casings, an old cassette tape, and other detritus. I think I was selected for an award on this, but it was so long ago, I sort of forget. 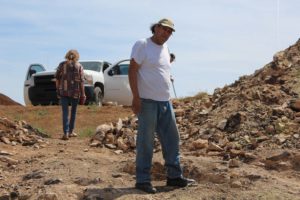 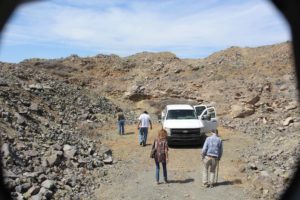 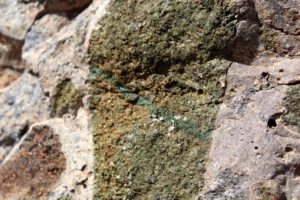 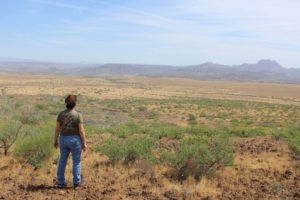 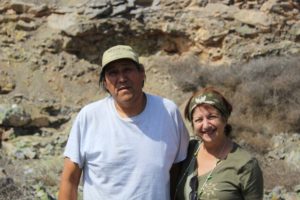 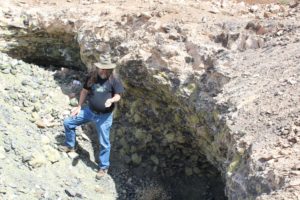 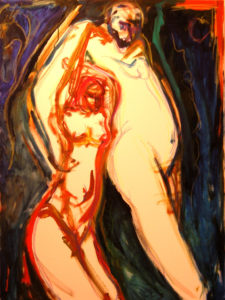 Yeah, a few too many martinis that night, I am sure.