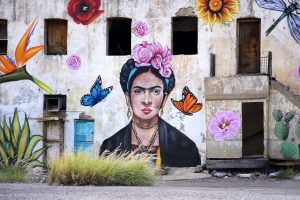 I took a personal day from work today.  It is a take them or lose them sort of thing.  Sunday, Liz and I went to Queen Valley to do some target shooting. Unfortunately we were not the only ones that had that idea and we could not find a place to set up. Being adaptable as we are, we headed to the Silver King Saloon in Superior and had a few drinks and an order of their famous loaded fries. 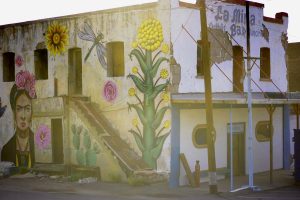 After lunch, we walked to La Mina – translation is The Mine. La Mina is an old bar in Superior that is open sometimes, but I have never had the pleasure to be their on the odd day that he has decided to open the establishment.

Work has been done to the building – a new mural graces the side, and the façade is refreshed.  I hope that this is s sign that it will be open to the public more often.  La Mina is Spanish, in the feminine, for the mine. That is appropriate, because mines are, well, holes. 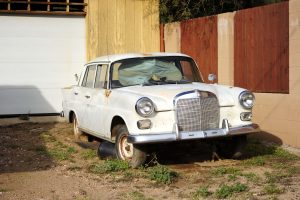 Superior is a very Mexican town.  The founders and many of the residents are of Mexican descent, and their families were here long before Arizona became a part of the American republic.

Today we headed back out to Queen Valley and were able to put a few rounds down range. Liz put her Ruger Blackhawk .357 magnum through the paces. I burned several magazines worth of .45 through my Springfield XDS.

I dusted off my Lee Enfield SMLE .303 and emptied a clip. This was the first time I have shot a high powered rifle since my shoulder surgery. Let me tell you, shooting a rifle with some kick with a detached bicep is no fun.  My reattached tendons did fine, but my muscle, not so much.

Liz was shooting a bit low, and put three .357 rounds into the target stand.  The rest were right on target. I had one flier with my .45 and put another round through the stand, Liz added a few more with her Glock, adding some 9mm rounds.  My fifth .303 round which hit the target, had so much punch the stand broke in half.  That ended our target practice.

Well, we ended our day with some day drinking. We packed up, and headed to the G-Bar-G Saloon in Mesa.  We heard good things about this dive bar.  G-Bar-G is a little dive on Main Street. We have passed many times, and today we dropped in. I am glad we did.  Like we need another great little dive bar in our itinerary!  This was the friendliest bar I have been to in Arizona. As soon as we sat down, the regulars started a conversation.

All in all, it was a good three-day weekend for me. I have one more coming before the end of the year. If I have my way, it will be another day of day drinking and G-Bar-G will be on our list.