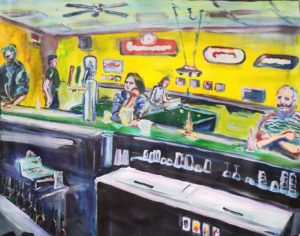 This painting was originally 28×30. Age has not been kind to the canvas. The stretcher frame warped and twisted, and I removed the canvas from the frame years ago. The canvas shrunk.Ellsworth was daytime bartender. I spent many lost afternoons at Larry’s, helped Ellsie end many shifts.

Larry’s has a very working class clientele. One of the better kitchens in Millville, NJ. You can order food until 1:30 AM. Package goods until closing time. And watch your language – dropping the f-bomb is sure to get you kicked out for the day.

I decided to re-stretch the painting this weekend, and the painting will be one of the only paintings that has shown previously at my upcoming show at Gallery 50 this May.

I posted our itinerary online for our short trip back east. After the opening, we will retire at Sidelines (one of the few bars I never painted, other than one of Sidelines in its former incarnation as Kirby’s Club 31). On Saturday we plan on heading to BoJo’s to hook up with old friends.

Larry was quite upset that we left him out. That was due to my short-sightedness. So on our first night back in town, we will head to Larry’s. I am hoping that he still has his box of steamers. These are steamed clams in a beer box top, with a bowl of melted butter.

Other than The Railroad Tavern, Larry’s is the last of Millville’s original bars. It will be good to revisit old haunts.