Arizona summers are brutal. Two weeks ago, we lost a local who decided to go hiking at Second Water in the Superstition Wilderness. He has not been found. The official search has been called off.

From July through September, we take sanctuary in our air conditioned houses and local drinking establishments. The studio is inhospitable.  With no new art or photographs to share, I have little to share here.

Autumn, or what passes for it in the Sonoran desert, arrives and we venture out.

This weekend we attended the Apache Jii festival in Globe. As we headed up the sidewalk in downtown Globe to the festivities, a dragonfly buzzed in front of us.

Globe is seeing a rebirth, a resurgence.  Like all mining towns, the city has seen hard times.  Many of the storefronts are still empty, but we saw new restaurants and even a new bar. After the festival, we headed to the Drift Inn, our favorite watering hole in Globe. 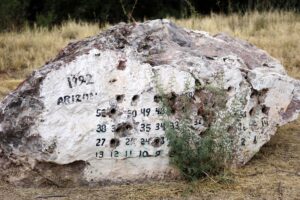 The Drift Inn opened in 1902. Tin ceiling, walls festooned wit oil paintings of scantily clad women that date back to the early years.

Omen #2, as we walked into the bar, “I Love this Bar” began playing on the juke box. Local Apache were playing pool. Bikers came in and took seats at the tables, rain water dripping off of them. I had a couple Hop Knot draughts, and Liz had one of their famous Bloody Mary’s, a veritable cornucopia of vegetables.  Need to eat your veggies daily!

After our drinks, we headed out, the rain stopping just in time.  We needed to head back to Apache Junction before the next wave of rains hit. It is no fun driving the 60 through Devil’s Canyon in a storm.

We stopped in Superior, another mining town, to gas up.  Gas in Superior is $1.00 a gallon cheaper than it is in the East Valley. We could not resist stopping at our favorite watering hole in Superior, the Silver King.

The 3rd omen was the rainbow we saw on our drive in to the Silver King. I have never seen the end of a rainbow, until yesterday. Rainbows indicate new beginnings. In today’s despicable political climate, I am sure waiting for a new beginning.  A pessimist at heart, I will take all the optimism I can get!

I had a shot and a few beers. We ordered their Loaded Fries – fries covered with slaw, brisket, barbecue sauce – and shared the order because they servings are huge.

The drive home was uneventful, and we pulled into our driveway just before the deluge hit.  So do I believe in omens?  Not really, but I also do not believe in coincidences.  I am certainly ready for new beginnings.