This past Friday, my good friend Dave and I took a trek through the Sierra Ancha wilderness.  Arizona state highway 288 begins near Roosevelt, at SR 188, and ends in the town of Young just over 40 miles away. The highway is mostly unpaved, and the scenery is breathtaking. 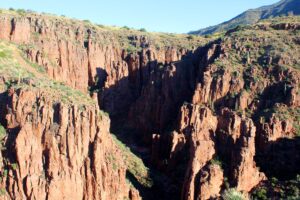 The beginning of the drive takes you past the Diversion Dam recreation area.  The elevation starts at 3000 feet, and steadily rises to over 6200 by the time you reach Pleasant Valley. 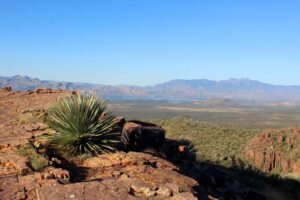 For much of the drive you see the Salt River meandering through the wilderness to the west.  There are numerous trails that take you to wonderful vistas and overlooks.

The temperatures were in the lower 50’s throughout the day, which made for a pleasant outing.
Once past Diversion Dam, you lose the center line on the road, and further along you lose the paving. 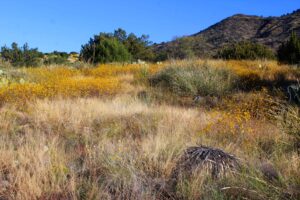 If you like camping, you will be hard pressed to find a bad spot. Keep your eyes open and you will see a variety of wildlife. If you are lucky, you’ll spot some deer or elk.

The fields were covered with brittlebush in some areas for as far as the eye could see.

As our elevation creased, the trees changed from ironwood and cedar and other desert varieties to Ponderosa pines.

There are gorges that drop several thousand feet and the hiking trails here are some of the most arduous in Arizona. As I am recovering from major shoulder surgery, we stuck to trails accessible to four wheel drive vehicles. For experienced hikers opportunities abound to explore ancient cliff dwellings and even Asbestos Point. Asbestos Point is easily recognized by the “Angel Wings” which are actually mine tailings. I understand there is still mine equipment and the workers’ quarters, but the hike is virtually straight up. Not for the faint of heart.

There are no amenities on the road, so make sure to pack plenty of water and snacks.  Don’t expect uninterrupted cell phone service either.  However, there is light at the end of the tunnel, or at least a cold beer at the end of the road. 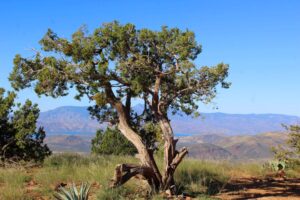 SR 277 terminates in the town of Young is situated in Pleasant Valley. Young did not get electricity until 1965, and cell service in 2008. They do have a motel, grocery store, and most important, a tavern.

If you are a student of history, you will recall the Pleasant Valley War, or the Tewksbury-Graham Feud. The Tewksburys and the Grahams started out as friends, both cattle ranchers. Their friendship  went to pot after a large rancher moved into the area, and played the two families against each other. 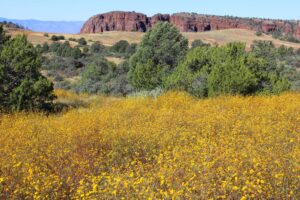 The feud began in earnest after the Tewksburys began ranching sheep, anathema to cattlemen. Sheep destroy the grounds they graze on, according to cattlemen.

The feud lasted from 1882-1892. It ended when most of the males from both clans were killed off, although there are rumors that it continued off and on until the 1950’s.  Today, the town of Young downplays that part of its history. The main drag is paved, but there is no paved road leading into the town from any direction. 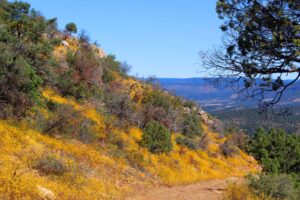 Situated halfway between Payson and Show Low, near the Mogollon Rim, with a population of just over 400, Young moves at a leisurely pace. There is no industry to speak of, other than  service  jobs.

The Valley Bar is basically the first building you come to on the south edge of town. A modest block building, inside it is what one would expect for a dive bar.  There is a real jukebox, none of these internet deals. The music selection consists of mostly country music and 1970’s pop rock.

We pulled into the parking space in front of the bar, a lot that has enough room for four vehicles. We were concerned that the establishment was not open, but our fears were allayed when the bartender walked from the side of the building. 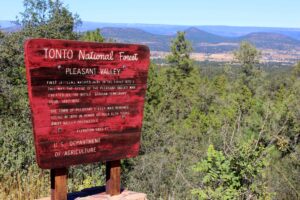 The bar was empty, apparently Young has no lunch crowd. The Valley Bar serves no food, but he did have packs of cashews. A pool table occupies space in the rear, and at 1 in the afternoon, the bar was dimly lit as it should be. I saw no beers on draught, only bottles and cans. 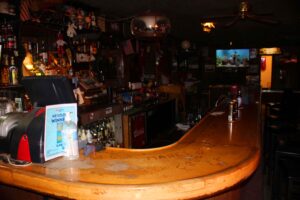 Pro-Trump memorabilia festoons the walls. A large screen television on the back wall displayed a fish tank screen saver.  The other smaller TV was off.  The bartender was happy to allow us to take photos.

We enjoyed a couple beers each, Dave ordered Guinness, I had the local Four Peaks Kilt Lifter. The bar has a rustic charm, it is definitely a working class tavern. The beer was cold, the ambiance was warm. 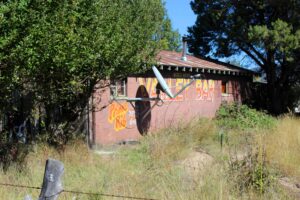 We took a quick tour of the town, not difficult since there is one road from one end to the other. If you are sick and tired of the congestion and California habits of your new neighbors in the East Valley of AZ, and are independently wealthy, Young is a wonderful town.  Not only do n you not have to sit at one traffic light after another (there are no traffic lights) you will encounter no traffic whatsoever. I can think of no better place to retire. 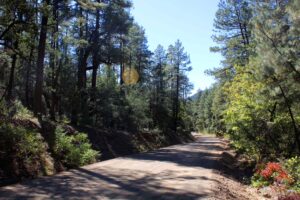 The drive back to Apache Junction was uneventful. I really enjoyed the change in scenery, seeing real trees for a change. I see construction everywhere in my town, and fear that soon we will become another Gilbert, Tempe or Scottsdale, over populated, congested – roads so clogged it takes you twenty minutes to drive five miles. Being two years out from retirement, I am actively seeking a slower pace of life.