Elisha Reavis is the epitome of the Superstition hermit. He is not the lost Dutchman, although his face might be one of the recognizable of the characters that settled this region.

This is part two in my series of a trek through the Superstition Wilderness outback. 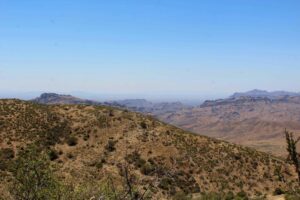 After a quick respite from exploring the Treasure Trove site, Dave and I headed roughly east along what is known as the Reavis Road.

From 5000 feet, the view all around is spectacular. Reavis Ranch, or what is left of it, not much, is about a two hour hike west from Roger’s trough trailhead. From Reavis ranch, you are abut two miles of hellish hike to Circlestone, a circle of rocks atop a mountain with no known origin. You are close to the prehistoric Salado cliff dwellings. 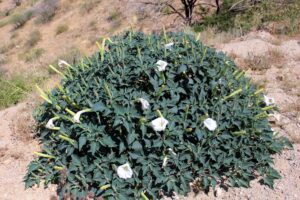 Being too old and out of shape for a hike in the June heat, we headed east along the trail that Reavis took to the town of Superior to sell the produce he grew on his farm.

But I get ahead of myself. On our drive in I noticed a plant that looked familiar. Moonflower bushes dotted the roadway. 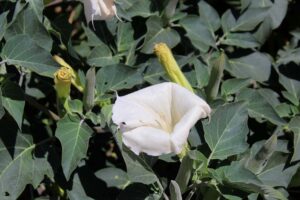 From my wasted youth I recognized moonflower as the plant that misused would cause mild hallucegenic episodes.  I know of kids that overdosed by eating the seeds. I will not be a tutorial on the proper way to engage in this dangerous activity, but our variation of this plant is prolific. 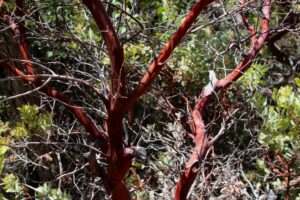 Indian shamans would smoke the seeds for enlightenment. The variety that is local, also known as Gypsum, is Datura, a stronger cousin to the Moonflower sold by Burpee.

You can tell the difference immediately by the shape of the leaves. Datura has arrow shaped leaves, Moonflower has heart shaped leaves. But enough of my pharmacopeia lesson.  Elisha probably didn’t partake. But then again, he did decide to build a ranch in what was literally the middle of nowhere, in the most inhospitable location he could find.

Elisha has a genuinely interesting story; gold miner, teacher, deputy, US Marshall, and eventually hermit. He manager to coerce crops from a rocky desert terrain, which a couple times a year he would sell in Globe, Superior, and Mesa.

We had a helluva a time driving a four-wheel drive Jeep along the rods he would have taken on the back of a mule.  Our drive took us past the saw tooth mountains, part of the legend of the lost dragoons.  As we crept closer to Superior we could clearly see the smoke from the Glove wildfire and even closer, the Picket Post wildfire. 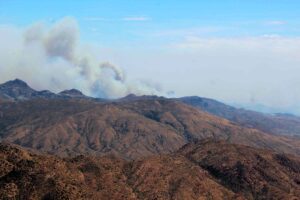 The wilderness we drove though is still recovering from recent wild fires in the past couple years. We saw constant reminders that we are in the midst of a drought. And still I see assholes watering their green lawns oblivious to the fact that without divine intervention this entire Phoenix region will run out of water in ten years. We are praying for a true monsoon this year.  It is unlikely as weather patterns are changing due to constant shifts in the earth’s axis that have nothing to do with carbon emissions.  But enough of that rant. 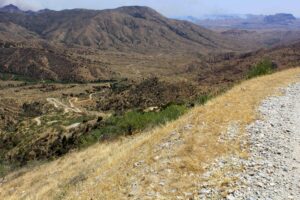 The downward trip to Superior was made on a road full of dangerously shard switchbacks and rock covered roads – or what we call roads, with rocky cliffs on one side and sheer drops on the other.

And no, there are no such thing as guardrails out here. One little misjudgment and we could have made it to the bottom in a natter of seconds! 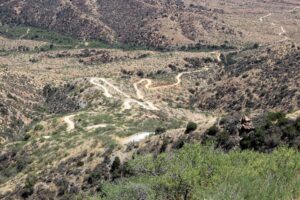 From our view above the road looks easy. The fact that it is littered with boulders is not apparent from the distance.

During this leg of our drive we did not encounter one other vehicle – proof of our own insanity? 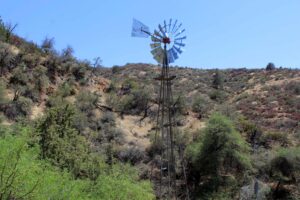 At the bottom of the twisting tortuous abomination of a road, we made a pit stop at an abandoned building. A windmill was fully functioning, pumping water into a holding tank.

The structure was built of huge boulders, and apparently someone had put a lot of energy into it’s construction. The roof had long ago given up hope of performing its sole duty of providing shelter. 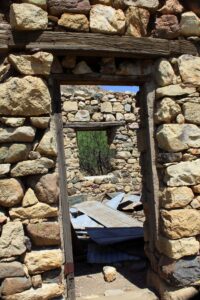 A structure, also of stone, next to it had fully collapsed.  It likely served as a stable. The walls of the main building were almost two feet thick. It is a work of art as well as engineering.

A fifty five gallon drum served as a makeshift stove. The corral next to it was completely overgrown with thorny desert vegetation. The trough was no longer capable of holding water. 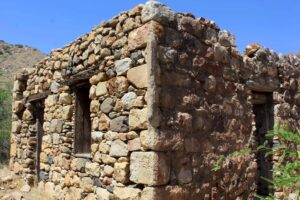 Yet amazingly the windmill was well maintained and operating. There were no signs of ownership. We speculate that the building was connected to a mining operation. Across a ravine we spied the opening of a defunct mine. The mine was collapsed inside.

There was very little sign of vandalism, possibly owing to the remote location and the difficulty of accessing it. Unfortunately some clowns had shot holes in the water tank.

We were nearing the end of our journey. We were only a few miles from the Town of Superior. Our next stop was to be the Pinal Cemetery, final resting place of Mattie Earp, one of Wyatt Earp’s wives.  That will be part of my final post in this series. 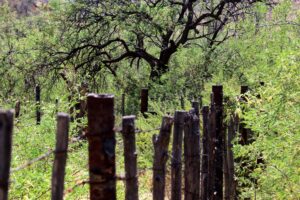 During this drive Dave had pointed out at least a dozen other points of interest that would have taken hours upon hours to explore.

I now regret parting with my RZR, because I can see many camping trips in my future exploring these lesser known areas of the Superstition and Tonto wilderness that I have grown to love.

We left this mysterious piece of local history and continued to the town of Superior. Smoke in the distance reminded us of the fragile nature of nature. Superior is surrounded by flames. We were headed to the fires.

In parting, I leave you with these words; “Don’t play with matches.”