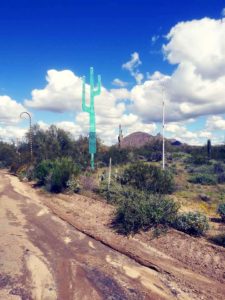 Along a stretch of Pima Road past Happy Valley Road in Snottsdale, er, Scottsdale, Arizona is an unexpected art display.

In Scottsdale, the rich eat each other.  Back in the 90’s before much of the area was built up, Henry Becker bought  parcel of land for upwards of two and a half million.  The land is zoned for low density residential use. Becker wanted to develop the land commercially, but was rejected by the city council.

Since then, his fight with Scottsdale has escalated. He installed candy cane poles and sculptures. The city ordered them removed, he fought and lost.  The insiders of Scottsdale government won, and one of their judges even forbade him from appealing the decision.

The judge dictated that the City of Scottsdale was allowed to enter his property and remove the sculptures. Of course, Becker would be charged for the services. There would be no compensation to Becker for the theft and destruction of his property. 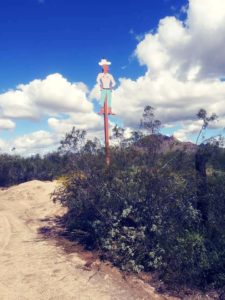 In 2007, Becker finally was granted his right to appeal by the Arizona Court of Appeals.  I am not sure where the many court cases stand, but at least the attractions are still standing. By now, they are landmarks, and one hopes that they will be preserved regardless of the actions of Scottsdale’s obnoxious city government.

IMHO, the land is better suited for sparse residential development than it is for commercial use. Current zoning only allows one house per five acres. Of course, this sort of dictates that only million dollar houses are built. Homes for the rich only, the poor need to move to Mesa or Surprise. 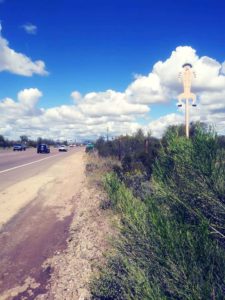 But I wonder. Scottsdale is a liberal, Democrat city. Rich Democrats opine the homeless plight, but live in communities where the poor are disdained and condescended upon.

The rich liberals are happy to dictate low income housing projects, as long as they do not encroach on their neighborhoods.

I live in Apache Junction, in the East Valley. Scottsdale and vicinity – Care Free and Cave Creek included – are in the West Valley. The likes of Dick Van Dyke and Alice Cooper lived here. Apache Junction was known to be mostly trailer parks and meth labs back in the day. That reputation still exists.

On my first visit to Scottsdale years ago, I met an artist and we had a conversation. The conversation was short, as he was a blithering asshole.  He asked where I lived, and I said Apache Junction. He then said, “Do you own or rent your trailer?” Life is too short to cater to douchebags.