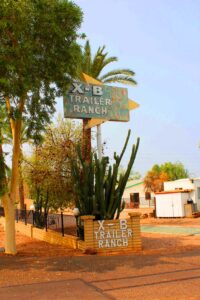 I have always been drawn to the underdog. Growing up in a town that saw extreme change, like most people I resent change. Change is inevitable.

At some point I understood the necessity to embrace change. Eventually you must cease to kick against the goads. If you fail to get my meaning, read the Book of Acts in the New Testament. 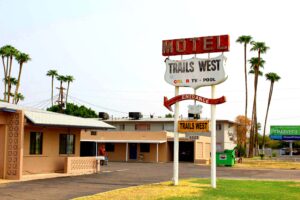 The very things that enticed me to this area are disappearing at a dishearteningly quick pace. It is rare to find the developer that understands the need of preservation of the old symbols.

This morning Liz and I took a drive down Apache Trail / Main Street from Apache Junction through Mesa, AZ.  The round trip was less than twenty miles, all told. I photographed points of interest, landmarks that I truly doubt will survive the next decade. 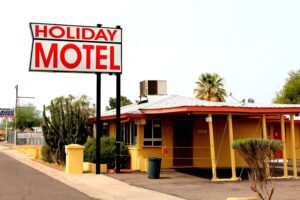 Motels and trailer parks will succumb to strip malls and residential development.  Cantinas have been abandoned. The many motor inns that lined the Old West Highway are mere veneers of their glorious past.

Back east I spent many evenings painting plein air, documenting the diminishing landmarks. Maybe one day soon I will have the time available to paint these East Valley landmarks on site. I could not afford to wait, for fear that the sites will not have the patience to wait for me. 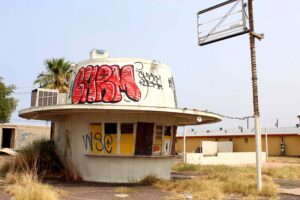 Until such time, I offer this photographic essay.  The weather cooperated, we barely hit 100°F today. The overcast sky in the photographs unfortunately was not cloud cover. Rather it is a nasty haze from the many wild fires not only in the Valley but forced over from the California wild fires. 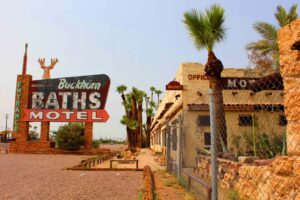 In the not so distant past – the 1950’s or so – the Apache Trail was as traveled as Route 66. The Buckhorn Baths were a resort built around natural hot springs. The New York Giants (now SF Giants) baseball team frequented the Buckhorn Baths for the therapeutic properties of the mineral rich hot springs. 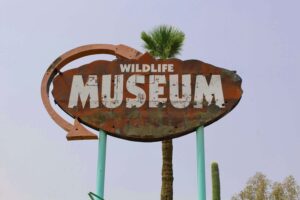 Unsuccessful attempts have been made to renovate and save this historic landmark. I understand that there are still groups trying to save this corner of what is a very ty of Mesa as avaluable piece of real estate. If you have a million dollars to lend me, I will be willing to work on it! 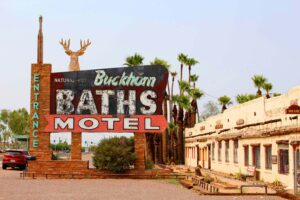 The City of Mesa has a vested interest in saving this landmark, but has not prevailed. However, even if this location is preserved, as it should be, there is little hope for the various motels and shops that impede progress on this commercially viable stretch of real estate. 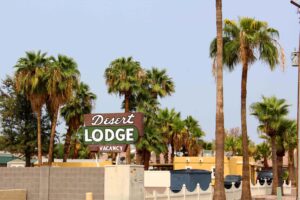 We might be able to save one piece of history from the impending doom of the progressive machine of modern development, we cannot save the rest from the bulldozer. 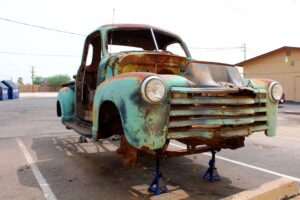 We cannot save all of the quaint buildings and businesses. Hell, the owners may likely not want to be saved, preferring the easy payout of selling and retiring. I know I would.

Pick and choose. I support all efforts at saving the Buckhorn Baths. With this in mind, I decided to document the remaining curious landmarks in my part of the Valley.  Today’s venture took us almost into downtown Mesa.

Tucked in between the plethora of strip malls are vestiges of the East Valley past. Trailer parks and motels. In the 1970’s, the strip malls were orchards and fields.

Today the strip is littered with RV dealerships, Quick Trip and Circle K gas stations, strip malls that are empty, and broken dreams. 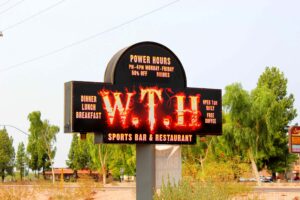 On our return trip we stopped at WTH (What the Hell) bar for a couple drinks and nachos.  Half the parking lot was filled with bikes.

WTH is in a strip mall… the face of things to come. Progress is progress.  WTH used to be in a small building partnered next to Up In Smoke smoke shop.  The building went up in smoke. Up in Smoke didn’t. WTH did. 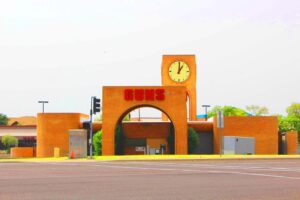 Progress and growth. Not too far down the street is a repurposed bank. In Arizona we love our guns. We have low gun crime, simply because law abiding citizens carry.  We have gun shops that also do computer repair. I doubt these guys are big fans of Bill Gates…

In this photo essay I did not document every gun shop along the row. There are more gun shops than old motels and decrepit trailer parks. I also skipped the 20 or so liquor stores.  To end this narrative we stopped at two local liquor stores.

We do not have mega stores in east Mesa or Apache Junction. We have mom/pop shops. But the prices are not extravagant. The employees greet you with a smile. I rue the day these stores are bought out and we are forced to buy from the big retailers. 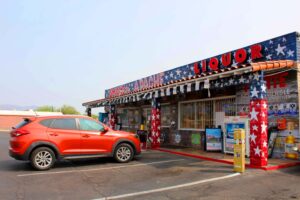 Speaking of which – let me back track. I was taking photos of the Buckhorn Baths. I had my sidearm not too prominently displayed, but visible. A black male came to the bus stop and sat down.  As I was taking photographs, he began a conversation.  He was obviously a native of the area, as we discussed the landmark. He was obviously not intimidated that I, a white male, was armed. I was not intimidated, as he was obviously educated and friendly.  We had a great conversation about the landmark, and he wanted them to be preserved too. There is no racism unless you create it!  But this was not meant to be a political post… 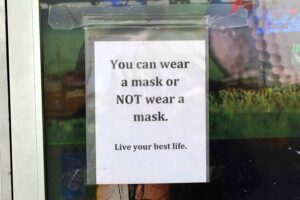 This part of Arizona is the last vestige of the old west. Freedom. Respect. We are doing our best to live our best life!